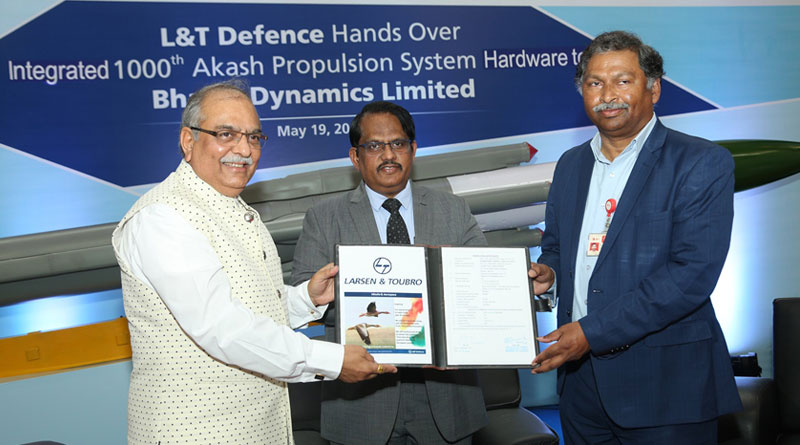 L&T Defence completed the manufacturing and delivery of 1,000 Integrated Propulsion Airframe System Hardware used in the manufacturing of Akash surface-to-air missiles at L&T’s Precision Manufacturing Systems Complex in Coimbatore. L&T Defence has been one of the leading industry partners of the Defence Research & Development Organisation (DRDO) which was present when L&T delivered the Propulsion Airframe Systems to Bharat Dynamics Limited (BDL).

Part of the Integrated Guided-Missile Development Programme (IGMDP), Akash is an all-weather medium-range surface-to-air (SAM) missile system. The Akash missile system allows for multi-directional and multi-target area defence. The missile can be launched from both mobile and static platforms like battle tanks and certain wheeled vehicles. Akash SAM system provides the deployment flexibility that allows for handling and destroying of multiple targets like unmanned aerial vehicles (UAV), fighter aircraft, cruise missiles, and missiles from helicopters.

A critical system of the Akash missile, the Integrated Propulsion Airframe System Hardware System comprised sustainer & booster motors (Section IV & V) integrated with 112 other sub-assemblies and components. Partnering with DRDO, L&T Defence was provided with the production technology and process development for Akash propulsion motors along with a produced prototype and limited series production of the Sustainer and Booster motors creating a viable ecosystem for medium to small-scale enterprises. The Integrated Propulsion System hardware is manufactured and integrated at L&T Defence’s facility at Coimbatore. The Akash System includes Ground Mobile Launchers and Rohini Radar Systems, both produced by L&T Defence. This system is inducted by both the Indian Air Force and the Indian Army.

V. Udaya Bhaskar added, “Our partnership with L&T… is an exemplary example of public-private partnership. L&T has played a key role in enabling the serial production of this critical missile system through innovation and use of advanced manufacturing technology.”

According to Dr S. Christopher, “Association of L&T in the early stages of programme’s development cycle is a key success factor in propelling Akash Weapon System induction by the users through accelerated industrialisation phase. Akash is a contemporary weapon system that has been inducted into the Indian Air Force and Army and has generated interest amongst nations across the world. I urge the industries to take the lead in exporting the system. Akash is one of the torchbearers of the ‘Design in India & Make in India’ concept of the government of India.”