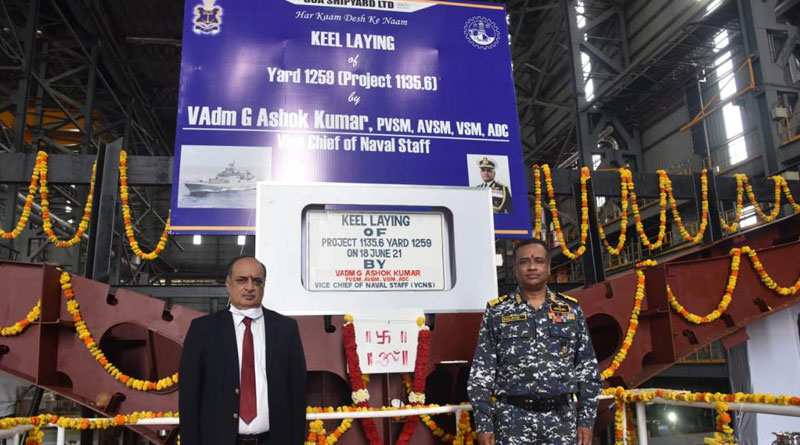 Keel of the second frigate of additional follow-on ship of Project 1135.6 for the Indian Navy was ceremoniously laid on 18 June by Vice Chief of Naval Staff Vice Adm G Ashok Kumar.

The ships under construction at Goa Shipyard Ltd (GSL) are part of indigenous shipbuilding program being executed under inter-governmental agreement with Russia for construction of two advanced frigates for the Indian Navy. The contract was signed on 25 January 2019 between Ministry of Defence and Goa Shipyard Limited. Keel Laying is a major milestone activity in the construction of any ship symbolising formal commencement of the construction process. Keel for the first ship was laid on 29 January. The first ship would be delivered in 2026 and second ship subsequently after six months.

Speaking on the occasion, Chief Guest, Vice Adm G Ashok Kumar appreciated the efforts put in by the Shipyard in achieving this milestone despite COVID constraints. He said that it was for the first time that these vessels, with such technological complexity were being constructed indigenously at GSL and marked an important milestone in our journey towards ‘Atma Nirbhar Bharat’ and Make in India initiative. He further added that a large number of major equipment are being substituted with indigenous equivalents, in addition to use of significant indigenous build material. The entire hulls of the ships are also being built with indigenous steel. He also highlighted major achievements of the Shipyard and commended the professionalism displayed by employees of GSL.

During his address, CMD-GSL highlighted various challenges faced by the Shipyard in executing this complex shipbuilding project. Despite challenges posed by the ongoing pandemic, the Shipyard continued the production activities with active support of employees and innovative solutions. He thanked the Indian Navy for their unstinted support and reiterated GSL’s commitment to cater for the requirement of Maritime Defence Forces through indigenous shipbuilding.