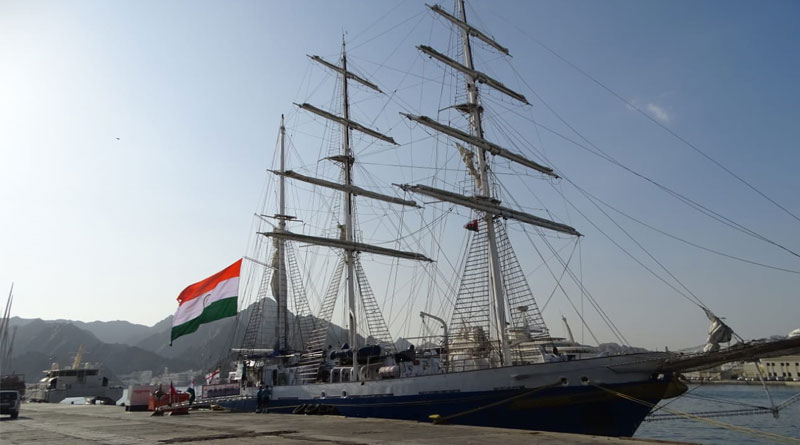 Indian Navy’s Sail Training Ship INS Sudarshini visited Port Sultan Qaboos, Muscat, Oman on 5 December 2021 for a three-day Operational Turn Round (OTR). The ship is part of the 1st Training Squadron based at Kochi which provides ab-initio sea experience to sea trainees of the Indian Navy. The ship is on a deployment to the Middle East aimed at strengthening ‘Bridges of Friendship’ with Friendly Foreign Countries in the region as also reach out to the Indian diaspora settled in the Gulf.

During her stay at Muscat, the ship’s crew engaged extensively with the Royal Navy of Oman. The Commanding Officer, Cdr Srikanth Venugopal, paid an official visit to HQ Royal Navy of Oman (RNO) and interacted with Capt Ali Al Hosini, Director General Human Resources, RNO. Naval cooperation, training of young officers and aspects of sail training were amongst the subjects discussed. The ship also undertook operational exchanges in the form of visits to RNO Sail Training Ship Shabab Oman II and Wudham Naval Base and embarked five sea riders onboard for a sea experience sortie.

The Commanding Officer also called on Ambassador of India to Oman, Muscat, Amit Narang. Ambassador along with the Indian Embassy staff also visited the ship and a familarisation tour was conducted onboard.

INS Sudarshini is an indigenously built Sail Training Ship (STS) built by Goa Shipyard Limited and based at Kochi, Kerala under the Southern Naval Command of the Indian Navy. The along with her sister ship, INS Tarangini form the sail training element of the 1st Training Squadron and has been imparting sail training to IN personnel as well as junior officers from friendly foreign countries.