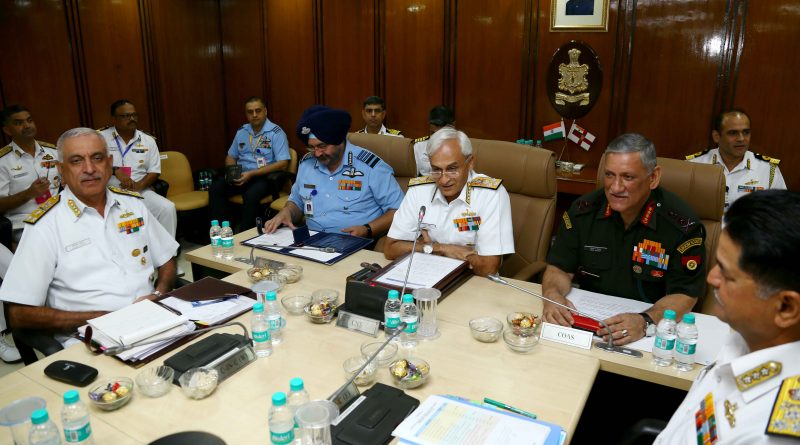 Prime Minister Narendra Modi’s vision of Security and Growth for all in the Region (SAGAR) is being pursued in full earnest by the Indian Navy.

The new mission-based deployment concept was unveiled in the last Naval Commander’s Conference and was ratified for incremental implementation. Supported by the MoD, the plan involves deploying mission-ready ships and aircraft along critical sea lanes of communications and choke points. These ships are deployed alwaysready to meet any eventuality across the spectrum of operationsranging from acts of maritime terrorism and piracy to HADR missions. These deployments are aimed to be maintained 24/7 and round the year with ships being sustained and turned around on station. The concept is already showing dividends with the Navy being the first responder to many crisis situations around the IOR. The Navy was the quick to respond to the heavy rains and flooding in Sri Lanka as also to the HADR requirements post Cyclone Mora in Bangladesh and Myanmar. The Navy was also there to secure the release of the Indian dhow Al-Kausar and the crew from Somali pirates. The rescue of three persons including a woman from a sinking tug off Maldives was another instance where a mission-deployed ship was available to respond immediately to a request for help.

The change in the deployment concept has necessitated a change in the methods used to sustain and support ships within the Navy. Accordingly, the Chief of the Naval Staff has approved a new Transition cycle for ships from Maintenance periods to Operational Deployments that allows for a focussed and gradual transition of ships from periods of maintenance layoffs to full scale operations. The new Transition cycle focuses efforts of Operational Commanders on ‘Training and Safety Inspections of ships’ prior to their deployment for operations.

Along with these deployments,the Navy has, in tandem with the MEA, focussed efforts on the Capacity and Capability development of navies in the region. The Indian approach of providing equipment and training is finding increasing favour amongst the IOR nations. The Indian Navy has a time-tested model of Joint operations with regional navies. The idea that there can be no growth without security is well understood. With the Indian Navy emerging as the Net Security Provider in the region, engagements through Coordinated patrols (CORPATs) of Exclusive Economic Zones (EEZ), Bi-lateral exercises, Training exchanges and cross-visits of trainees and others have seen an increase.

The initiatives to improve the security environment in the region and provide opportunities for growth to all have seen an unprecedented ‘Whole of Government’ approach. Synergy between initiatives of the MoD, MEA and the Navy has resulted in more effective and efficient engagements in the region. The Navy’s ability to deploy and sustain in tandem with the new mission-based deployment concept has resulted in greater presence and visibility.

The ongoing Naval Commander’s Conference would,among other issues, review the new Mission-based deployment concept and seek to ascertain its effectiveness. The top naval commanders would also deliberate upon ways to improve its efficiency and functioning.

Prime Minister Narendra Modi’s vision of SAGAR is being unfolded in an effective and deliberate manner through security cooperation and capacity/capability building initiatives to protect and preserve maritime security, peace and stability in the region.