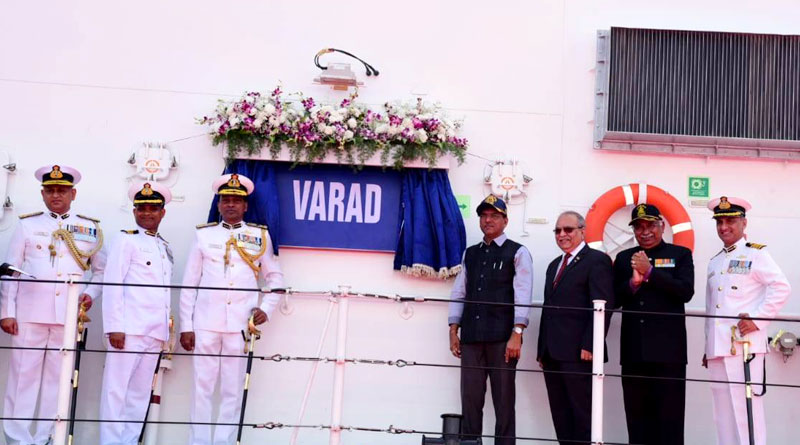 The ship is being based at Paradip, Odisha under the Operational and Administrative control of the Commander Coast Guard Region (North East)

Indian Coast Guard Ship ‘Varad’, the fifth in the series of seven Offshore Patrol Vessels (OPVs) constructed by M/s Larsen Toubro Ltd., was commissioned at Chennai by Mansukh Mandaviya, minister of state for shipping (Independent Charge) on 28 Feb 2020 in the presence of Director General Indian Coast Guard Krishnaswamy Natarajan and other senior dignitaries of the Central and State Government.

According the official press release, “This 98 meter OPV has been designed and built by M/s Larsen & Toubro Ltd at Kattupalli, Chennai and is fitted with state-of-the-art navigation and communication equipment, sensors and machinery. She will be equipped with 30mm and 12.7mm guns with FCS for enhancing the fighting efficiency. The other special features onboard are Integrated Bridge System (IBS), Integrated Platform Management System (IPMS), Automated Power Management System (APMS) and High Power External Fire-Fighting system. The ship is designed to carry one twin engine helicopter and four high speed boats including two rigid hull inflatable boats for swift boarding operations, Search and Rescue, Law Enforcement and Maritime Patrol. The ship is also capable of carrying Pollution Response equipment for oil spill response at sea.”


The ship draws approx 2100 tons (GRT) and is propelled by two 9100kw diesel engines and attains a maximum speed of 26 knots, with an endurance of 5000 nautical miles. The sustenance and reach, coupled with the latest and modern equipment and systems, provides her the capability to perform the role of a Command platform to accomplish the Coast Guard Charter of Duties. The ship, on joining the Coast Guard North Eastern fleet, will be deployed extensively for EEZ surveillance and other duties as enshrined in the Coast Guard Charter, to safeguard the maritime interests of India. The Indian Coast Guard with this ship joining the fleet will have 147 ships &amp; boats and 62 aircraft. Further, 58 ships are at various stages of construction at different Shipyards in India and 16 aircraft (ALH) are under production by M/s HAL, Bengaluru.

ICGS Varad is commanded by Commandant Pintu Bag and has a compliment of 11 officers and 91 men.