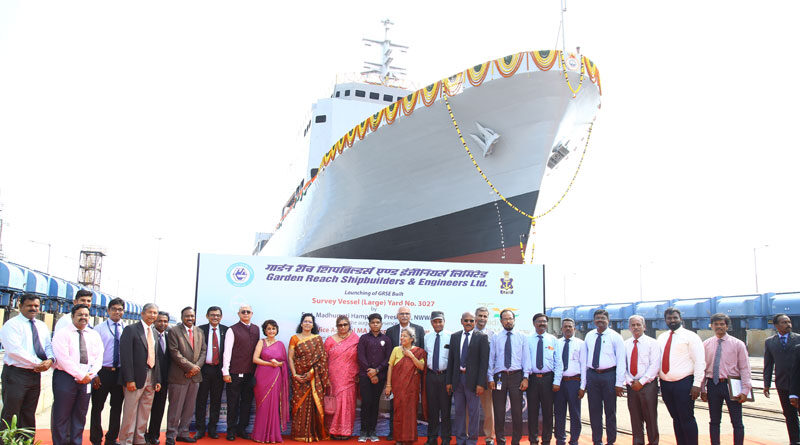 Ikshak, the third of the four Survey Vessels (Large) (SVL) Project, being built by GRSE/L&T for Indian Navy was launched on 26 November 2022 at Kattupalli, Chennai. The ship made her first contact with water of Bay of Bengal at the Launch Ceremony attended by Flag Officer Commanding in Chief, Southern Naval Command, VAdm MA Hampiholi. In keeping with the naval maritime tradition, Madhumati Hampiholi, spouse of VAdm MA Hampiholi, launched the ship to the chanting of invocation from Atharva Veda. The ship has been named ‘Ikshak’ which means ‘Guide’. The ship has been named to signify the contribution of the Survey ships towards facilitating safe passage for mariners at sea.

Contract for building four SVL ships was signed between MoD and Garden Reach Shipbuilders & Engineers (GRSE), Kolkata on 30 October 2018 for a total cost of Rs 2435 crore.

As per build strategy adopted by GRSE, first ship is being built at GRSE, Kolkata and construction of balance three ships (up to outfitting stage) has been sub-contracted to L&T shipbuilding, Kattupalli. The first of class ship ‘Sandhayak’ was launched on 5 December 2021 at GRSE, Kolkata, by Pushpa Bhatt, wife of State Defence Minsiter, Ajay Bhatt, who was the Chief Guest for the launch ceremony.

SVL ships will replace the existing Sandhayak Class survey ships with new generation hydrographic equipment to collect oceanographic data. The Survey Vessel (Large) ships are 110 metre-long, 16 metre-wide with deep displacement of 3400 tons and a complement of 231 personnel. Propulsion system of the ship consists of two main engines in twin shaft configuration and is designed with cruise speed of 14 knots and maximum speed of 18 knots. Bow & stern thrusters have been catered for better manoeuvring at low speeds required during shallow water survey operations. The hull of these ships is made from indigenously developed DMR 249-A steel manufactured by Steel Authority of India Limited.

With a capability to carry four Survey Motor Boats and an integral helicopter, the primary role of the ships would be to undertake full-scale coastal and deep-water hydrographic surveys of ports and navigational channels. The ships would also be deployed for collecting oceanographic and geophysical data for defence as well as civil applications. In their secondary role, the ships can provide limited defence, besides serving as hospital ships during emergencies.

The navy stated in a press release that despite challenges due to COVID-19 pandemic, L&T and GRSE had made substantial progress and aim to deliver Ikshak by October 2023. Launch of the third Survey Vessel reinforces our resolve for indigenous shipbuilding as part of our Prime Minister’s vision of ‘Make in India’ and thrust to the vision of ‘Aatmanirbhar Bharat’. The survey vessels will have over 80 percent indigenous content by cost. This will also ensure that large scale defence production are executed by Indian manufacturing units thereby generating employment and capability build up within the country.