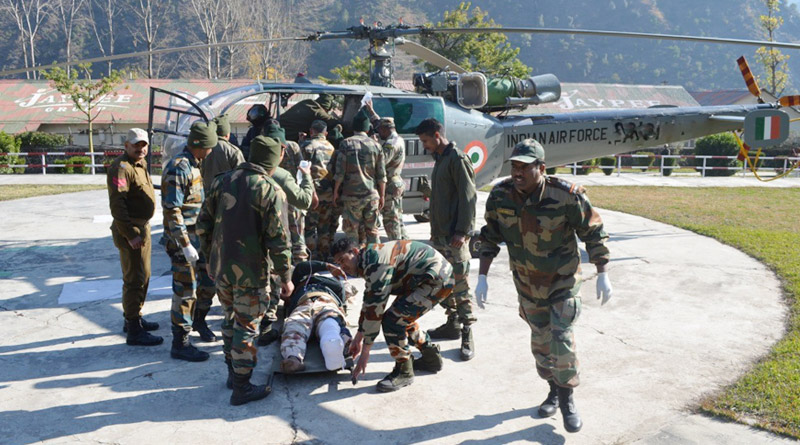 The Western Air Command of Indian Air force deployed two Cheetah helicopters of the Udhampur based unit, Hovering Hawks, to carry out casualty evacuation from Chanderkot helipad on a short notice, on 24 December 2018.

The incident occurred when a civil bus on route from Badgam to Kanpur fell into a gorge near Ramban, which led to several critical casualties. Two helicopters and two sets of crew were on standby to take off from Udhampur to Chanderkot helipad, where the casualties were initially evacuated.

With Wg Cdr V Mehta as captain with co-pilot Arunima Vidhate, the helicopters left for immediate evacuation of the victims at Udhampur. After initial assessment, the second helicopter was flown from Udhampur with Sqn Ldr SK Prasad as captain and Flt Lt Siddhant Yadav as co-pilot.

“Due to power station and several microwave towers on eastern side of helipad, helicopters had to carry out one-sided approaches and take offs with thorough traffic coordination with civil helicopters. Additionally, the site had limited manoeuvring space,” said the mission leader and captain of the lead aircraft Wg Cdr Vishal Mehta.

The helicopters flew the injured to the Jammu airport, where the ambulance was ready to ferry the victims to the hospital.

The crew of Hovering Hawks executed the mission with extreme professionalism keeping up the highest traditions of the IAF, said a press release.