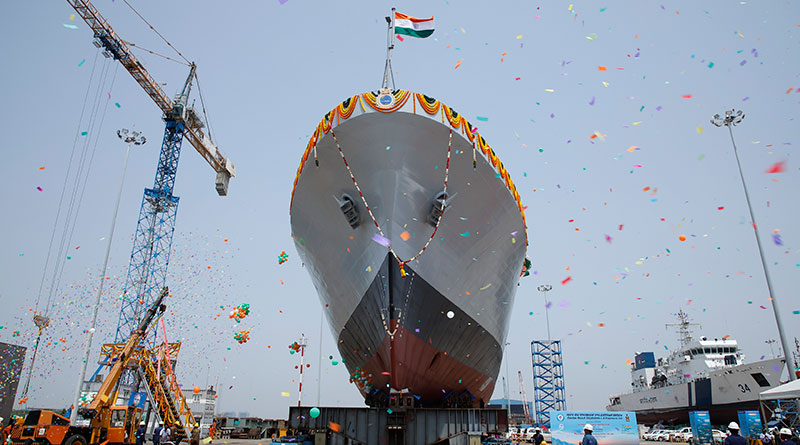 Vice Admiral Biswajit Dasgupta was the Chief Guest at the occasion. This is the second vessel in a series of four such ships being built by GRSE for the Indian Navy to be launched in less than six months.

The first ship, INS Sandhayak, was launched in Kolkata on December 5, 2021.

GRSE has vast experience in building Survey Ships for the Indian Navy. In the 80s, a series of six hydrographic survey vessels were delivered by GRSE to the Indian Navy. The first of them was named INS Sandhayak. After serving for 40 years, the ship was decommissioned in 2021, a few months before the new INS Sandhayak was reborn in Kolkata in December 2021. The launch of INS Nirdeshak now signals the rebirth of ex-INS Nirdeshak, another Survey Ship of the Sandhayak Class built by GRSE in 1983 and later decommissioned in 2014 after 31 years of glorious service.

The latest series of Survey Vessels (Large) being built by GRSE is far more advanced as compared to the earlier series of survey ships in the Indian Navy’s fleet, a press release stated. “These modern, indigenously developed 110-metres long and 16-metres wide ships have a displacement of nearly 3,400 tonnes and can attain a top speed of 18 knots with an endurance of 6,500 nautical miles,” it added.

Congratulating GRSE on the achievement, Vice Admiral Dasgupta acknowledged that a large number of ships of the Eastern Fleet are being built by GRSE.

He said, “The newer ship ‘Nirdeshak’ will be more capable, larger, modern, state-of-the-art with advanced propulsion and manoeuvring and will be able to operate autonomous and remotely operated systems. The ship’s ability to perform the full spectrum of hydrographic and oceanographic operations of the Indian Navy will make us even more potent and foreign navies are looking to the Indian Navy for the hydrographic co-operation. The vessel has achieved 80 per cent of indigenisation by cost which is a significant achievement for Indian shipbuilding.”

Applauding the efforts of the Indian shipyards, he highlighted the tremendous shipbuilding opportunities ahead with 31 ships to be constructed in the coming years by the Indian Navy and expressed hope that the near future will see Indian shipbuilding industry making serious inroads in obtaining a much larger share in the global shipbuilding.

In his speech during the ceremony, Cmde P R Hari IN (Retd) highlighted the capability of these ships and acknowledged the contribution from all stakeholders including industry partners in achieving the major milestone with 45 per cent physical progress.

These ships are capable of full-scale coastal and deep-water hydrographic survey of port and harbour approaches and determination of navigation channels and routes. They can also carry out surveys of maritime limits and collect oceanographic and geographic data for defence applications. These ships are propelled by two marine diesel engines combined with fixed pitch propellers and are fitted with bow and stern thrusters for manoeuvring at low speeds while carrying out surveys.

In order to ensure swift delivery of quality, GRSE has now enhanced its capacity through tie-ups with capable Private Shipyards under the Public-Private Partnership (PPP) model for part construction of ships. Further, these ships are now being built using the ‘Integrated Construction’ concept through which maximum pre-outfitting is being carried out at the block stage itself.
GRSE is the only shipyard in the country to have built and delivered 105 warships to the Indian Navy and Indian Coast Guard. Two warships built by this shipyard were also exported by the Government of India to Mauritius and Seychelles.

Currently, GRSE is working on 23 ships. Seven of these are for foreign orders. This Defence PSU has also been bagging orders through competitive bidding. Among the larger ships that GRSE is working on at present are the Stealth Frigates under the Indian Navy’s Project 17A. The shipyard is also building Anti-Submarine Warfare Shallow Water Craft for the Indian Navy. In keeping with the Atmanirbhar Bharat theme, GRSE has achieved nearly 90 percent indigenisation, even for large ships.