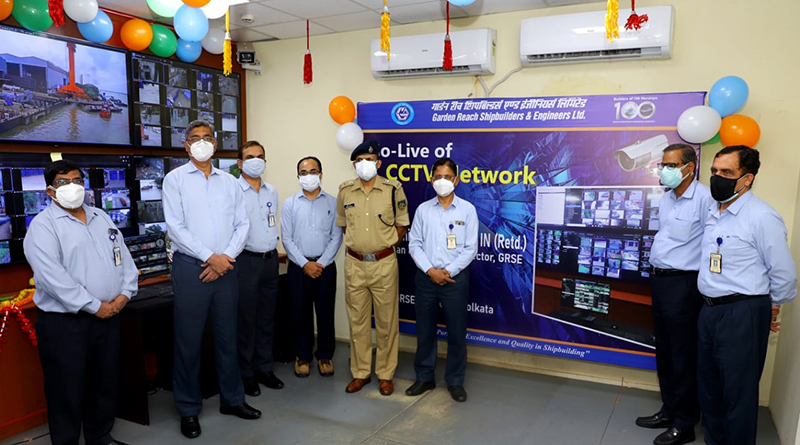 Adopting the latest technology with respect to the security of infrastructure and other assets, Garden Reach Shipbuilders and Engineers Ltd. (GRSE) has commenced an Artificial Intelligence (AI) enabled high-end CCTV network across its five units in Kolkata at a cost of Rs 12.95 crore.

The state-of-the-art technology will enable surveillance of 152.81-acre area of the shipyard to ensure 24×7 safety and security of all its premises. The AI-enabled system will also prove to be a valuable tool during any investigation, detecting unauthorized intrusion or trespassing.

This flexible and intelligent security of GRSE’s infrastructure is the need of the hour for a defence PSU and the shipyard has deployed the CCTV Network to boost operational safety and productivity.

All the CCTV cameras across the units are integrated with each other. The special Artificial Intelligence feature that has been enabled in the CCTV system includes tracking unidentified goods and materials, automatic alarm in case of an unusual gathering of personnel, tracking alarm of camera tampering, automatic alarm for trespassing/intrusion, and tracking of personnel/vehicles of dubious nature.

Since its inception as a Defence PSU in 1960, GRSE has built 788 platforms which include 107 warships to Maritime security forces, which is the highest number of warships built & delivered by any shipyard in the country, till date. GRSE has the capability to construct 20 ships concurrently, using its modernized infrastructure and ‘Modular Integrated Construction Philosophy’. Further, the dedicated, multi-disciplinary, in-house Design Team of the shipyard is continuously working towards developing various concept designs for ships that can cater to the current and future requirements of the Indian Navy and Indian Coast Guard. GRSE has also been steering research and development for energy-efficient technologies that can be inducted into service on India’s inland waterways and provide cost-effective solutions to other nations.