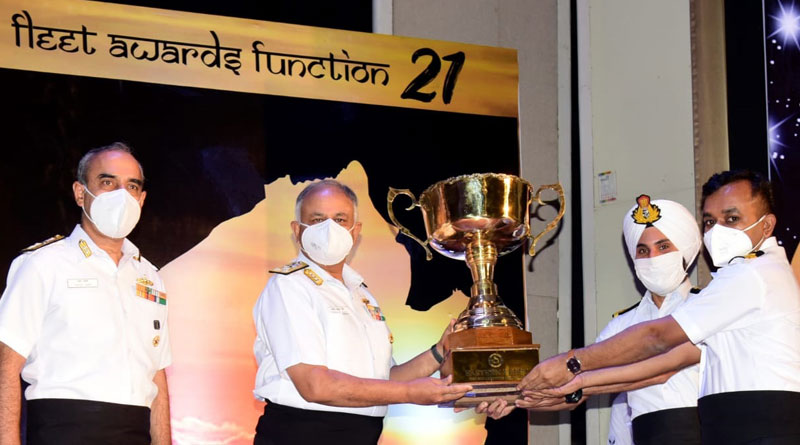 As compared to previous years, the Fleet Awards Function was held as a modest event with full observance of COVID protocols.The function culminated with the distribution of sixteen coveted trophies covering the overall spectrum of maritime operations. INS Sahyadri was adjudged as the Best Ship of the Eastern Fleet amongst Capital ships, INS Kamorta as the Most Spirited Ship for displaying indomitable spirit and grit whilst undertaking a plethora of challenging missions and Best Corvette trophy as won by IN Ships Kiltan and Khukri amongst Corvettes and similar classes of ships.

The year gone by was a challenging one for the Sunrise Fleet. Even as the COVID pandemic gripped the world, Eastern Fleet went about its operational responsibilities and maintained a forward active posture. Sustaining high operational tempo, the Fleet ships participated in numerous operations, exercises, and humanitarian assistance missions. The Eastern Fleet ships participated in several major bilateral and multilateral exercises such as Malabar-20, La Perouse, PASSEX with various navies and undertook Op Sahayam and Mission SAGAR for delivery of HADR stores and Op Samudra Setu for evacuation of stranded Indian citizen from overseas. In the second wave of COVID-19 as Op Samudra Setu II, Eastern Fleet ships acted as the mainstay for enhancing oxygen delivery to the Eastern seaboard emphasising its role as a professional and credible force.