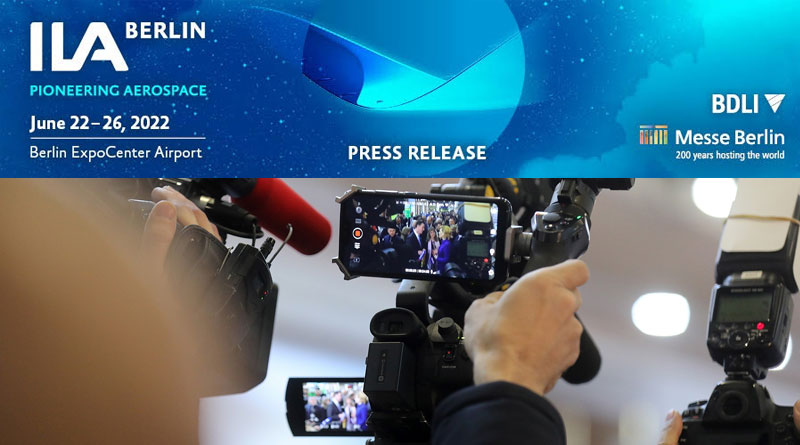 Climate neutrality by 2050 – with its ’Destination 2050’ road map, Europe’s aviation industry has pledged to become climate-neutral by mid-century.

From 22 to 26 June ILA Berlin will be showing how this can be achieved on the exhibition grounds at BER Airport.

The leading trade fair for sustainability, new technologies and innovation is the meeting place and platform for dialogue for the international industry, policymakers, the armed forces, and science. On a total of five live STAGES, the focus will be on forward-looking aerospace technologies and key research topics. Sustainable aviation fuels, aircraft, and propulsion systems, as well as the digital transformation of the industry, will be the main points of discussion.

The Future Lab is the key element of the ILA STAGE and is being jointly organised by the Federal Ministry for Economic Affairs and Climate Action (BMWK) and the German Aerospace Industries Association (BDLI). Sustainability and achieving climate-neutral aviation by 2050 are key topics at ILA, and the Future Lab will address them directly in the display halls. Featuring prominently at the ILA Future Lab will be today’s pioneers and innovations, who will provide a close-up experience of the green future of aviation. How can we become climate-neutral over the next three decades? What forms of innovation, disruption and support will be necessary to prepare aviation for a climate-neutral future?

Key topics here are new hydrogen propulsion systems, the use of sustainable aviation fuels (SAF), and optimising production with lightweight designs, new materials, and aerodynamics, with the aim of minimising CO2 emissions. Experts will also discuss the role of start-ups in achieving sustainable commercial aviation and the use of digital solutions in an aircraft’s life cycle. Another topic for on-stage debate will be electrically powered flight and its role in tomorrow’s urban transport landscape.

At ILA Berlin the Federal Ministry for Economic Affairs and Climate Action (BMWK) is organising the EXHIBITION area at the ILA Future Lab. Graphic exhibits will present the key development programmes of the federal ministry, including its aviation research programme (LuFo climate), the national space programme and the micro launcher competition of the German Aerospace Industries Association (DLR).

Zero-emissions aviation on the horizon

At the ILA Future Lab visitors can gain an insight into the industry’s innovative efforts. Among the aviation highlights at the exhibition will be a model of a four-seater hydrogen-powered aircraft. It represents an important technology platform for developing and demonstrating CO2-free propulsion systems in aviation and recently set a new altitude record for hydrogen-electric aircraft at over 7,230 feet. The exhibition will show how hydrogen-powered aircraft can be used over short distances in the future. At a demonstration featuring a full-sized door, visitors will be able to clearly see how lightweight design, digitalisation, aerodynamics, and new materials can reduce an aircraft’s CO2 emissions by over 50 per cent. Another highlight will be a demonstration of how on-board electric cabling can be used for data communications. The Power Line Communication concept is designed to minimise cabling and aircraft weight. The many and wide-ranging exhibits at the ILA Future Lab Exhibition will show that by conducting joint research, zero-emissions aviation can in principle be achieved by 2050.

Protecting the climate from space

At the ILA Future Lab the BMWK will also be presenting the latest space development programmes, including the micro launcher competition of the German Aerospace Industries Association (DLR), worth 25 million euros in prize money. The idea is to encourage start-ups to design mini-rockets, so-called micro launchers, with the aim of helping to create low-cost commercial access to space and supporting long-term business models for micro launchers.

Another highlight will be the EnMAP satellite mission. This hyperspectral satellite has been orbiting Earth since April 2022 and conducts measurements of various spectral bands of visible and infrared light. This provides scientists with detailed information on the state of water bodies, forests, and glaciers, which can then be used to better understand environmental changes and support climate protection measures.