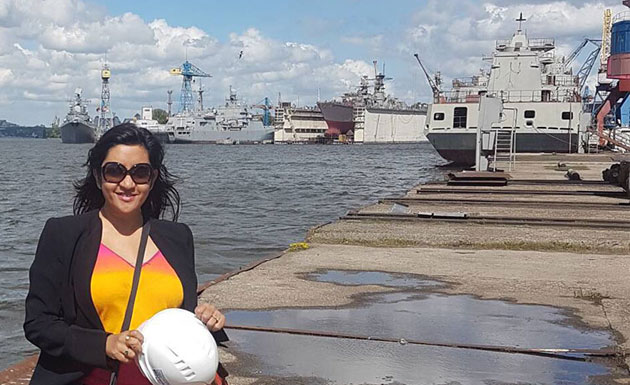 Kaliningrad, Russia: Indian Navy is likely to turn the agreement for the procurement of four Grigorovich class (based on the proven design of INS Talvar) ships into firm orders by the end of this year. Perhaps, it was this confidence that led the Russian ministry of defence to invite a group of Indian journalists, the first time ever, to not only interact with the general director (Russian equivalent of a chief operating officer) of the yard, but also to visit the shop floors and the under construction frigates on the assembly rig.

Interestingly, the media visit coincided with the visit of a high level delegation from the Goa Shipyard (GSL), which has been nominated by the government of India to built two of the four vessels in India. Brushing away the coincidence, general director Eduard Efimov, said, “I had visited Goa Shipyard in March this year and had invited my counterpart to visit Yantar. I am happy that they accepted the invitation at this time.”

However, despite Efimov’s confidence about the order, certain aspects of the possible contract remain shrouded in mystery. The Russian Navy ordered six of the Grigorovich class to urgently meet a shortfall in its frigate fleet. The new frigate design that it was working on was taking too long. Grigorovich was based on the earlier Krivak class, which became the Talvar class in India.

Since Yantar had built six of those, it was a proven design and was expected to roll of the yard in a short time. The only snag in this assumption was Russia’s geopolitical ambitions; the power plant for the vessels came from Ukraine. Hence, when President Vladimir Putin marched into Crimea, pushing the already tenuous relations with Ukraine to breaking point, the programme hit a road block. Ukraine refused to supply the engines. As a result, while three ships are ready (with the third one undergoing trials), the next three are parked in the Yard in various states of construction.

Enter Indian Navy with the offer of buying four of the class it is extremely pleased with. Several options were discussed with the Russians, including the possibility of India buying the engines directly from Ukraine and supplying it to Russia. Meanwhile, Russian engine company, United Engine Corporation (UEC) was tasked by its ministry of defence to develop an engine for the frigate. Despite the keenness of the shipyard to sell the under construction frigates to the Indian Navy and get the ships off its outfitting rig, the Russian Navy has been opposed to the idea. UEC claims to have the engines ready and are apparently undergoing trials. Hence, the navy would rather wait.

Also, though the Indian Navy will be happy to buy off the under-construction ships and save on time, the problem is, it will not fit in the ‘Make in India’ mode. The GSL will be reduced to putting the ships together under Russian guidance. After all, the design is Russian. Moreover, despite its pride in the Talvar class, the Indian Navy will certainly want a little more bang for its buck, instead of nearly a decade old ship.

Efimov shrugged his ignorance. “Everything depends upon the requirements of the Indian Navy. We will know what exactly it wants once the firm order is placed. I am hopeful it will happen by the end of this year.” As far as the shipyard is concerned, between exporting a brand new ship, built from scratch for the Indian Navy and supplying the one already under construction, the time difference would be only of a year. The former will take about four years from the time the order is placed and the latter will take about three years.

So what exactly was the GSL team doing at Yantar? “I think the best word to describe their visit is familiarisation,” said Efimov. End of the year is just a few months away.