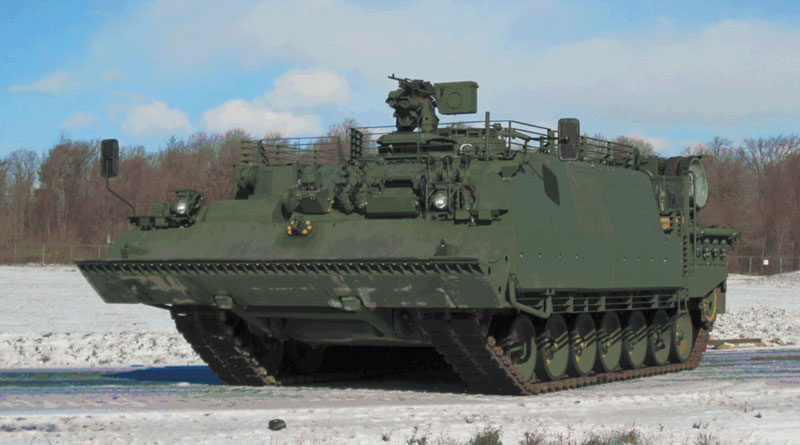 Company to overhaul 21 Bergepanzer 3 Büffel ARVs of the Royal Netherlands Army, bringing them up to the latest technological and tactical standard

The Royal Netherlands Armed Forces have awarded Rheinmetall an order for the second phase of the modernisation of their fleet of Bergepanzer 3-Büffel/Buffalo armoured recovery vehicles, the company said on December 19. The operational effectiveness of twenty-one vehicles will be upgraded, it said. According to Rheinmetall, the order is worth a mid-double-digit euro million figure. Now launched, Phase 2 follows a first order awarded in April 2019, when the Royal Netherlands Army contracted with Rheinmetall for the modernisation of four Bergepanzer 3 Büffel/Buffalo ARVs.

“Starting immediately, Rheinmetall will completely overhaul another 21 Bergepanzer 3 Büffel ARVs of the Royal Netherlands Army, bringing them up to the latest technological and tactical standard. This will extend the service life of these tried-and-tested combat support vehicles – developed by Rheinmetall on the basis of the Leopard 2 chassis – through to the year 2040. The Dutch armed forces will take delivery of the first vehicles at the beginning of 2021,” Rheinmetall said in a statement.

The company said the modernisation work will take place at Rheinmetall locations in Kassel, Germany as well as in Ede in the Netherlands. It will include a complete overhaul of the individual armoured recovery vehicles and a new digital operating concept; the installation of advanced visualisation technology; mission packages featuring ballistic and mine protection; and new battlefield recovery equipment together as well as a universal transport platform. Also included in the contract are technical documentation, training and other services.


“This service life extension will give the Dutch armed forces a reconfigured state-of-the-art ARV with significant growth potential. New force protection features both on and in the vehicle will keep the crew extremely safe from modern battlefield threats. Cutting-edge visualisation systems, digital operating elements and command systems will support the crew while carrying out their tasks. Furthermore, new battlefield recovery equipment will boost the vehicle’s tactical effectiveness. It will be transferred to the rear section of the vehicle. This will let the crew hook up to a damaged Royal Dutch Army vehicle such as the Bushmaster, Boxer, CV 90 infantry fighting vehicle, PzH 2000 self-propelled howitzer, Leguan bridge-laying tank, Kodiak combat engineering vehicle or the Leopard 2 main battle tank without having to leave the safety of the fighting compartment, before towing it from the battlefield at high speed in forward gear. In addition, the modified version of the Bergepanzer 3 Büffel ARV will feature a flexible-use universal transport platform mounted on the rear section of the vehicle. To cite just one example, this can be used for carrying equipment for recovering other vehicles. The new equipment has already demonstrated its effectiveness during deployed operations,” read the statement.

This contract confirms the emergence of a new standard for modern armoured recovery vehicles. As recently as December 2018, the Bundeswehr contracted with Rheinmetall to modernise its fleet of Bergepanzer 3 vehicles, ensuring they remain a match for current and future operational scenarios. Similar mission configurations are in service with the armed forces of NATO member Canada as well as Sweden.

Already underway, the service life extension of the Royal Netherlands Army’s armoured recovery vehicles underscores once again Rheinmetall’s comprehensive expertise when it comes to the globe-spanning Leopard 2 family. This expertise extends from maintenance and modernization programmes to advanced armament concepts, and from the production and technical knowledge of the system’s original equipment manufacturer right through to comprehensive technical and logistic support for entire vehicle fleets – including service support during deployed operations. The portfolio of the Düsseldorf-based high-tech group for mobility and security also includes training and simulation solutions for Leopard 2 crews.