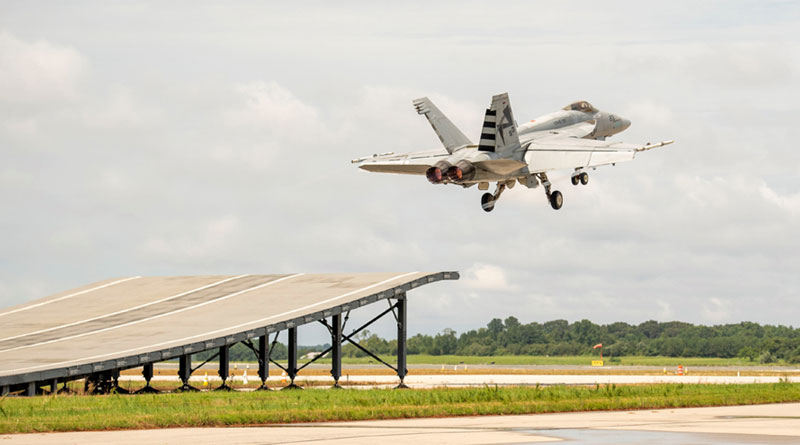 Demonstrating the aircraft’s suitability for India’s aircraft carriers, Boeing and the U.S. Navy recently proved that the F/A-18 Super Hornet can operate from a ‘ski jump’ ramp. India is looking to buy fighter jets for its upcoming aircraft carrier, the IAC-I.

“The demonstrations, held at Naval Air Station Patuxent River, MD, show that the Super Hornet would do well with the Indian Navy’s Short Take-off but Arrested Recovery (STOBAR) system and validate earlier simulation studies by Boeing,” a press statement from the aircraft maker said.

“The first successful and safe launch of the F/A-18 Super Hornet from a ski-jump begins the validation process to operate effectively from Indian Navy aircraft carriers,” said Ankur Kanaglekar, Head India Fighters Sales, Boeing Defense, Space and Security. “The F/A-18 Block III Super Hornet will not only provide superior war fighting capability to the Indian Navy but also create opportunities for cooperation in naval aviation between the United States and India. The F/A-18 Block III Super Hornet will offer unrivalled growth potential to the Indian Navy through single and two-seater carrier compatible variants and the ability to interface with the P-8I as a force multiplier.”


The statement further added that the F/A-18 Block III Super Hornet will offer the Indian Navy value in form of advanced war fighter technologies at a low acquisition and affordable cost per flight hour because of its ease of maintainability design and durability. The Indian Navy stands to benefit from the multi-billion dollar investments made towards new technologies in the Super Hornet by the U.S Navy and several international customers. This includes advanced network technology, longer range and low-drag with conformal fuel tanks, long-range detection with Infrared Search & Track, enhanced situational awareness with a new Advanced Cockpit System, improved signature reduction and a 10,000+ hour life.

As part of Boeing’s proposed “By India, for India” sustainment program, the Block III Super Hornets can be serviced in partnership with the Indian Navy as well as India and U.S. based partners throughout the lifecycle of the aircraft. This will further develop advanced expertise in aircraft maintenance in India, resulting in higher availability of the aircraft at competitive pricing and reduced risk for the Indian Navy.

Boeing is on schedule to deliver next-generation Block III capabilities to the U.S. Navy in 2021 and by 2024, one squadron per carrier air wing will consist of Block III Super Hornets. Making the platform the U.S. Navy’s dominant force in the skies, the Super Hornet provides the most weapons at range in the U.S. Navy’s fighter inventory, including five times more air-to-ground and twice the air-to-air weapons capacity.