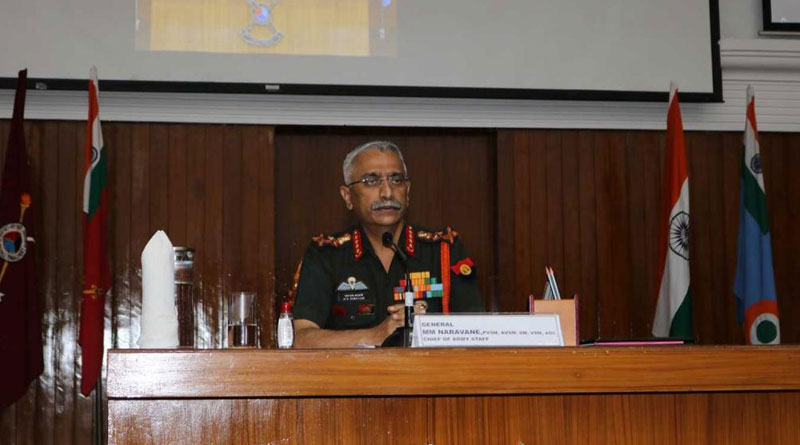 During his address to the student officers and faculty of CDM, he spoke on a number of issues concerning integration, theaterisation and modernisation of the armed forces in general and the Indian Army in particular. On the government’s decision to appoint the Chief of Defence Staff (CDS) and create the Department of Military Affairs (DMA), he said that it was “a momentous one” and that the services needed to “demonstrate great wisdom and statesmanship in enabling the CDS, a long standing demand of the Armed Forces”.


He added that the next logical step in the process of defence reforms was the “formation of Integrated Theatre Commands to synergise the capabilities and combat potential of the three services during war and peace.” However, he advised that this process will be “deliberate, thoughtful and well considered” and its fruition will take a “number of years.”

The COAS explained to the officers that there was a need for everyone to work in a spirit of togetherness and trust with the national security interests being paramount. He added a note of caution and said that there might be a requirement for “mid course corrections.”

The COAS was optimistic about the future of integration of the armed forces, which he said was “an inevitability” as it would lead to “tri-services synergy” and optimisation of resources.

He commended the CDM for the excellent work related to grooming of tech-adept, management savvy and strategically nimble higher leadership.  He also released  the  Golden Jubilee Commemorative  Coffee Table Book on the occasion.

The COAS commended the formation for their high level of operational preparedness and exhorted all ranks to continue training hard with zeal and be prepared for any future operational challenges. He was appreciative of the recent flood relief operations and protection measures taken by the units in the fight against COVID-19.

Later, the COAS visited the Simulator Development Division (SDD), Secunderabad and the TATA Boeing Aerospace Limited (TBAL) at Hyderabad, a joint venture facility of Boeing and Tata Advanced Systems established for co-production of Apache Helicopters-64. The COAS appreciated the ‘Make in India’ initiatives and reinvigorated efforts towards indigenisation and being ‘Atmanirbhar’ on niche technologies.