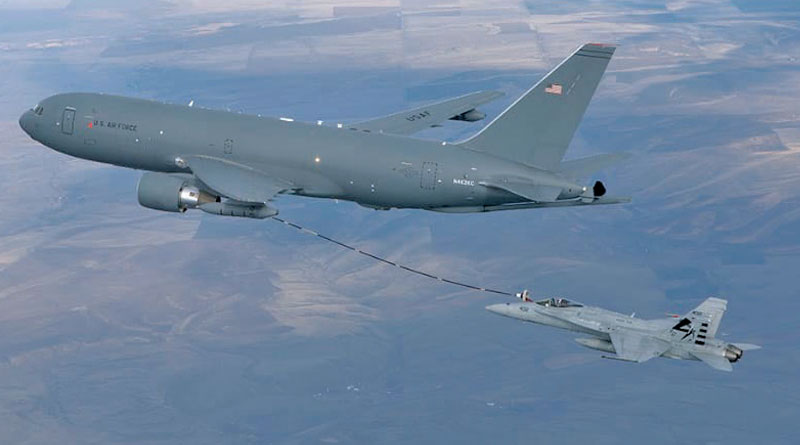 KC-46 PEGASUS IS BOEING’S military aerial refuelling and strategic military transport aircraft. The US Air Force (USAF), in January 2021 ordered 12 additional KC-46A tanker aircraft from its maker, Boeing. The company is now on contract for 79 tankers for the USAF; 42 aircraft have been delivered already.

A press statement from Boeing on the same stated, “The recent contract award from the USAF for an additional 12 KC-46A Pegasus aircraft is a testament to the success of the air-refuelling platform by Boeing which is enabling the USAF to provide in-flight refuelling services to bombers, fighters, airlifters, surveillance aircraft, and other aircraft flown by the US military.”

It added that with the KC-46A Pegasus, ‘a new era of aerial refuelling and mobility capabilities has dawned and Boeing plans to build 179 of the 767-based refuelling aircraft for the air force to replace its legacy tanker fleet.’ With the Indian Air Force (IAF) intending to convert itself into an expeditionary force, the air refueler is believed to be a necessity in the coming years. The IAF has already taken decisions to increase its operational reach by deciding to enable all its aircraft and helicopters for combat and support role for mid-air refuelling.


Following an agreement with the USAF, Boeing is currently refreshing the entire Remote Vision System of the KC-46. LIDAR sensors (imaging, ranging and object detection) are being developed in the automotive industry for collision avoidance and autonomous navigation in ground vehicles. Boeing is leveraging those commercial applications for use in the KC-46.

The KC-46 is already providing significant capability to the USAF, having delivered more than 28.9 million pounds of fuel to a wide array of receiver aircraft. In addition, the KC-46A will be certified to refuel 64 aircraft models, including the C-17 Globemaster, F-22 Raptor, B1 and B2 bomber aircraft, among others. Of course, this number will continue to grow as additional aircraft are added to the USAF and ally fleets.

Unmatched Capability For India
The KC-46 has the lowest life-cycle costs of any of its current competitors in the market, making it the most efficient tanker available today.

The aircraft can be rapidly reconfigured in two man-hours for any mission— carrying passengers, cargo, aeromedical or any combination of the three, while still performing its main air refuelling role. With its main cargo deck door, the KC-46 has 7,800+ square feet of cargo space to accommodate up to 18 full-size 463L pallets. It also has a fully integrated capability that enables crews to perform aeromedical evacuation on any flight.

Robust Defensive Systems
The KC-46 is delivered with a robust suite of defensive systems and self-protective measures. It is electromagnetic pulse-hardened for missions in a nuclear environment for the high-end fight as well as incorporates flight-deck armour for protection against small arms. Additionally, the KC-46 is equipped with chemical-biological protective systems.

All of these systems are incorporated into the aircraft as it is being produced, not as a retrofitted modification. The KC-46 also has the ability to launch from a ‘ready state’ within 10 minutes and coupled with its threat awareness and avoidance system, allows the Pegasus to truly fuel the fight.