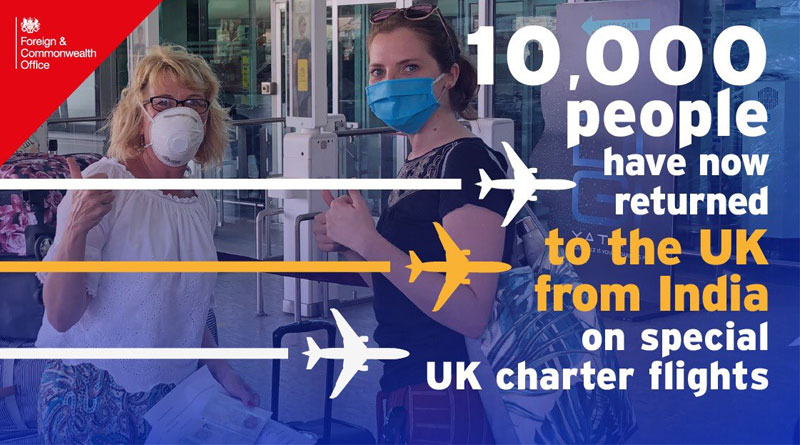 Once these flights are completed, over 16,500 travellers will have been brought back from India on 64 special flights

The UK has announced five further flights to bring stranded British travellers home from India. Once these flights are completed, over 16,500 travellers will have been brought back from India on 64 special flights chartered by the government.

Details of the new flights are as follows:

The British High Commission in India in its statement said, “As with the last round of flights, seats on the planes will be allocated to those who have already registered on the Government’s online booking portal, Corporate Travel Management (CTM). Staff at the British High Commission in India will continue to provide assistance to those waiting to return to the UK.”


Minister of State for South Asia and the Commonwealth, Lord (Tariq) Ahmad of Wimbledon said, “These further flights bring the number of planes chartered by the Government to bring British travellers home from India to 64. Our special charter flight programme has been a concerted effort, with daily flight departures to the UK from across India since 8 April – alongside ongoing support to those who remain.”

Acting High Commissioner to India Jan Thompson said: “We have helped over 14,000 travellers return to the UK so far on charter flights, and I am pleased to announce a further round to bring back those still waiting to get home. I strongly encourage anyone who wants to leave to accept seats offered to them. We continue to support all British Nationals who require assistance”.

These flights will bring back eligible British Nationals and depart from regions of India with the highest demand.

The British High Commission is seeking to help vulnerable non-British UK residents with Indefinite Leave to Remain where possible. Other foreign nationals may also be accommodated where possible.

Seats will be allocated to those who had previously registered. Those who are eligible to fly will be sent information on how to get to airports and flight itineraries directly when their seat is confirmed.

Details regarding flights and luggage allowance are available on the India Travel Advice page.