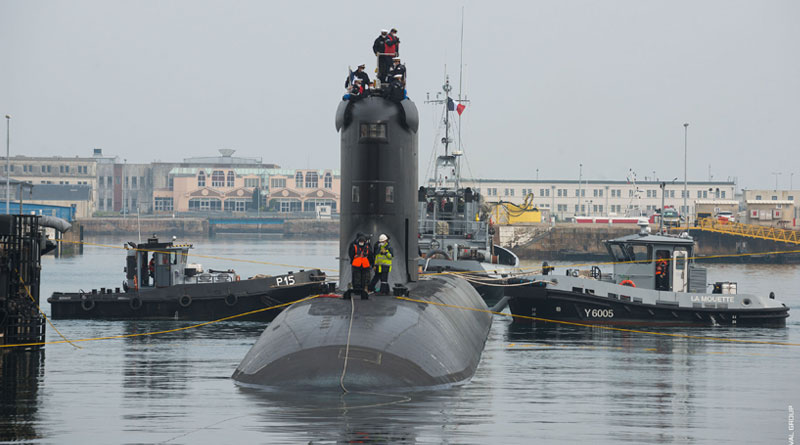 This series of sea trials follows the divergence of the nuclear reactor which took place in December 2019 and the dock tests carried out since the launch of the submarine on July 12, 2019. Trials were conducted by joint teams from Naval Group, TechnicAtome and French authorities

“This series of sea trials follows the divergence of the nuclear reactor which took place in December 2019 and the dock tests carried out since the launch of the submarine on July 12, 2019. The operations successively took place in the assembly hall as well as in the dry and water-filled docks to test equipment and systems, such as the combat system. Trials are conducted by joint teams from Naval Group, TechnicAtome and French authorities,” official press release from the Naval Group stated.

Sea trials constitute a phase of qualification of on-board installations for a nuclear submarine and are aimed to ensure water-tightness in the underwater environment and manoeuvrability, performance of the combat system, tactical weapons and high-tech equipment which are on board of this new generation of nuclear attack submarine and full performance of its operational capacities.


Technical characteristics of the Suffren-class submarines are that they have a surface displacement of 4700 tonnes, diving displacement of 5200 tonnes, length of 99 metres and diameter of 8.8 metres. The armaments that they carry include naval cruise missiles, F21 heavy-weight wire-guided torpedoes, Exocet SM39 anti-ships missile, pressurised water reactor which is derived from the reactors on board the Triomphant-type SSBN and Charle-de-Gaulle aircraft carriers, two propulsion turbines, two turbo generators and two electric motors. The submarine can  carry 65 crew members and commandos.

“The first sea trial of the Suffren is a source of great pride for Naval Group employees and their partners. I am extremely grateful for the efforts of our teams. They made it possible to start these trials while respecting strict compliance with the health and safety measures to protect the crew which is partly constituted of Naval Group members. These trials are additional proof of Naval Group’s total commitment to the French Navy, the French defence procurement agency (DGA) as well as to the French Atomic and Alternative Energy Commission (CEA), TechnicAtome and the other industrial actors of the defence sector. Together, we are conducting the sea trials that will lead to the delivery of the Suffren and committed to the production of the other five submarines of the series, which is a major priority for the company”, said Pierre Eric Pommellet, Naval Group’s Chairman and CEO.