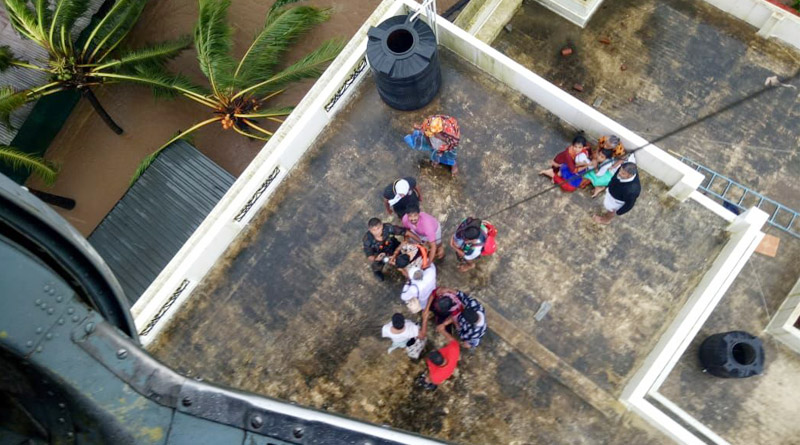 The SNC rescue teams have been augmented by Gemini boats, divers and other resources from both Eastern and Western Naval Commands of the India Navy for the rescue operations across Kerala

The Southern Naval Command’s Operation Madad is on full swing to meet the increasing requests for relief and rescue from the affected areas of Kerala. The SNC rescue teams have been augmented by Gemini boats, divers and other resources from both Eastern and Western Naval Commands of the India Navy. As of 4:30 pm on August 19, the eleventh day of Operation Madad, the total number of diving teams deployed was 92, which have been sent to multiple locations across the affected districts. Twenty newly inducted teams were put into action today, to augment those already in place. Rescue operations were extended to two more districts of Kannur and Alappuzha, in addition to the three districts already covered of Thrissur, Ernakulam and Pathanamthitta. A total of 14,797 people have been rescued by boats, over 609 people airlifted to safety and relief material worth 8000 kg air dropped till date.

Earlier on 17 Aug, INS Deepak had sailed from Mumbai for Kochi with divers, Geminis, raincoats, gumboots, bottled water, fresh rations and ready to eat meals. The ship entered Kochi on 19 Aug and handed over relief stores. Over the next few days, the ship will stock up more fresh water and relief material from Karwar for a second round of replenishment at Kochi.

A total of 48 rescue teams with one Gemini boat each are deployed in Ernakulam district at various places. One team is at Pizhala island, one at Edapally,  seven at Perumbavur, 16 at North Paravur, 10 at Aluva, four at Muvattupuzha, seven at Kadangallur and two at Athani. About 250 persons located at  Moolamvelli Church were shifted in civil boats to a safe place by the rescue team at Pizhala island. As water levels started to recede, the rescue team expanded the area of operations to include eight nearby islands.

The rescue efforts in the district have expanded to include Athani near Nedumbassery.  In the Thrissur district, the deployment at Chalakkudy has been reduced to seven teams and another three teams are deployed at Mala. In Pathanamthitta district, ten teams are deployed at Chengannur, 17 at Thiruvalla, and one team each at Ayroor and Pullad. Meanwhile, the deployment at Wayanad district was called off as the situation improved and the teams were diverted to other more critical locations. One rescue team is positioned at Kannur and 19 teams are in Alappuzha district. All together, rescue teams have been able to rescue more than 3575 people by boats as on 19 Aug 18.

On the night of 19 Aug 2018, the Western Naval Command sailed the Indian Naval ship Mysore with relief stores embarked for Kochi to provide assistance to Flood hit Kerala. The ship is carrying with about 70 tonnes of relief material which includes  30 tonnes of Bottled Water, 1000 Ready to eat meals, 10 tonnes of fresh ration, 5 tonnes of milk, 5.5 tonnes biscuits and other miscellaneous stores like medicines, and essential toiletries, phenyl, gash bags, bleaching powder, candles, etc. The relief material also includes items received from some NGOs in Mumbai. The Western Naval Command’s Karwar Naval Base also sent approximately 15 tonnes of fresh rations on Indian Naval Ship Sharda on 19 Aug 2018.