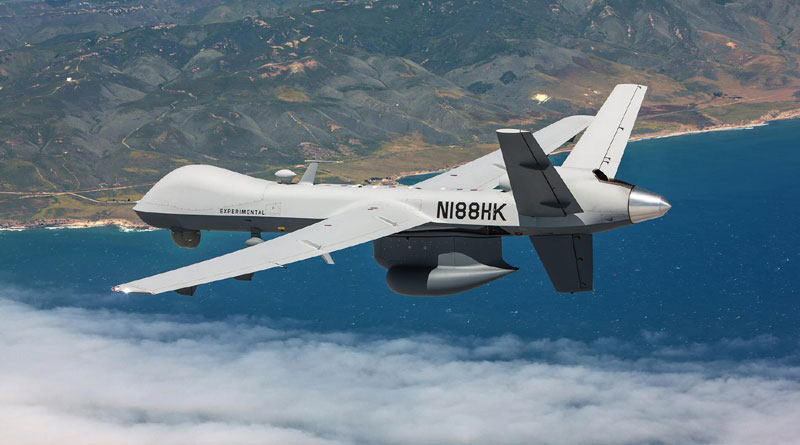 The MQ-9B SkyGuardian Remotely Piloted Aircraft (RPA) has now flown more than 100 test flights as development continues towards its first delivery to the Royal Air Force (RAF) as part of the Protector RG Mk1 programme.

Designed and developed by General Atomics Aeronautical Systems, Inc. – the GA-ASI has kept the new RPA busy performing a variety of flights, from long endurance testing (logging 48.2 consecutive hours in flight in May 2017) to becoming the first Medium-altitude, Long-range RPA to perform a trans-Atlantic flight in July 2018. A second company-owned SkyGuardian was completed in September 2018 to support the aggressive development workload.

The Royal Air Force (RAF) is acquiring SkyGuardian as part of its Protector RG Mk1 programme and is scheduled for first delivery in the early 2020s. The Government of Belgium has approved Belgian Defense to negotiate the acquisition of SkyGuardian to meet the nation’s RPA requirements. The aircraft is also being considered by the Australian Defence Force, who chose GA-ASI to supply an RPA system for Project Air 7003.


“There’s no rest for these aircraft,” said David R. Alexander, president, Aircraft Systems, GA-ASI. “They’re built to remain aloft for long periods of time performing the important missions our customers require. SkyGuardian is customizable with nine hardpoints and payloads to meet customer requirements. Just another reason why we’re getting so much interest from international customers.”

GA-ASI designed the new RPA as the next generation of multi-mission Predator® B fleet. GA-ASI named its baseline MQ-9B aircraft SkyGuardian, and the maritime surveillance variant SeaGuardian, which is available with a multimode 360-degree Maritime Patrol Radar and a host of other maritime capabilities.

MQ-9B development is the result of a five-year, company funded program to deliver an unmanned aircraft to meet the stringent airworthiness type-certification requirements of NATO and various civil authorities. As part of the certification effort, MQ-9B is being provisioned with a GA-ASI-developed Detect and Avoid (DAA) system. The DAA system consists of a Due Regard Radar and processor, coupled with an advanced Traffic alert and Collision Avoidance System (TCAS II), and Automatic Dependent Surveillance-Broadcast (ADS-B). The new RPA is also built for all-weather performance with lightning protection, damage tolerance, and a de-icing system.