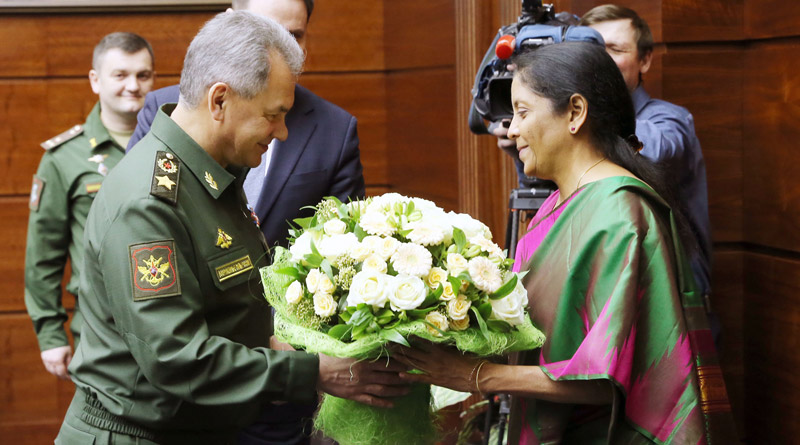 Following Nirmala Sitharaman’s ‘successful’ US visit, she will now engage with her Russian counterpart, defence minister Sergey Shoigu, when he visits India on December 14. The main issues on the table for discussion will be the leasing of another Akula-II class nuclear-powered attack submarine for USD 3.3 billion and the deal for Kalanishkov AK-series rifles to be made in India. According to Financial Express, the Russian defence minister will be coming for a plenary session of Indian-Russian Intergovernmental Commission on Military Technical Cooperation

This assumes major significance because recently, Chief of Naval Staff Admiral Sunil Lanba visited Moscow wherein he attended various meetings including discussions with director, Federal Service of Military-Technical Cooperation, Dmitry Shugaev. Following the CNS’ visit to Russia, a high-level delegation from the Indian Navy also visited Russia to inspect Akula-II class submarines. The Akula-II class submarine is expected to replace INS Chakra, which was taken on a 10-year lease from Russia for USD 2.5 billion in 2011 with the lease expiring on 2022.  Even the National Security Advisor, Ajit Doval met his Russian counterpart recently on December 7.

This will be the first meeting of the two defence ministers since the two countries inked the S-400 deal back in October. After S400, India also signed a USD 950 million deal to purchase two Admiral Grigorovich class frigates directly from Russia and a contract to build two more at Indian shipyard.


The two sides are expected to review the status of the government to government agreement under which the Kalashnikov AK-series rifles are to be produced by the state-owned Ordnance Factory Board (OFB). Russia’s offering is the AK-103, a modernised version of the AK-47/AKM rifle that is already in use by the Indian Army, and Para military Forces to be manufactured indigenously.

Following Sitharaman’s visit to the United States, both countries agreed to accelerate their defence and security ties. Nirmala Sitharaman’s American counterpart, defence secretary James Mattis described India as a ‘stablising force’ across the Indo-Pacific while reviewing ongoing initiatives to further strengthen bilateral cooperation. Terming the same as a ‘key pillar’, secretary Mattis had welcomed Sitharaman on December 3 at the Pentagon for the fourth set of talks between the two this year.

Defence secretary James Mattis said that the ‘2+2’ dialogue also made clear the commitment of India and the US to further bolster their defence partnership. “Today, we build on that momentum as we work to implement our agreement from September, Communications Compatibility and Security Agreement (COMCASA),” he added.

During the dialogue, the two nations signed the COMCASA that allows India to receive advanced US military hardware. Secretary Mattis also expressed confidence that India and the United States would be able to resolve all issues related to India’s purchase of the S-400 air defence systems from Russia that could draw possible US sanctions. India risked being imposed with CAATSA (Countering America’s Adversaries Through Sanctions Act) when it recently signed the deal to buy the S-400 air defence missile system. CAATSA deals primarily with countries having “significant transactions” with Russia, North Korea or Iran. Russia’s S-400, a long-range surface-to-air missile defence system, was ordered by India this year in October. India needs a presidential waiver to get around the punitive CAATSA sanctions. “We will work everything out. Trust me,” said secretary Mattis.