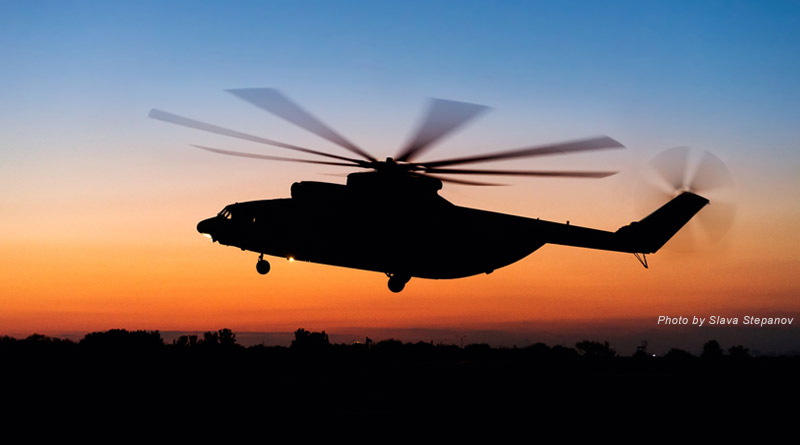 The helicopter will be flown to the Army-2018 exhibition. After the forum, experts from Mil Moscow Helicopter Plant will conduct preliminary tests of the Mi-26T2V. After that, the rotorcraft will be handed over to the military for state tests.

“The Mi-26, being the largest mass-produced helicopter in the world, is used to perform extraordinary tasks impossible for other rotorcraft. Each part of the new machine should provide maximum performance. The on-board equipment of Mi-26T2V will make the helicopter even more efficient and reliable, even when used in bad weather and difficult terrain,” said Russian Helicopters CEO Andrey Boginsky.

The customer requested that the Mi-26T2V be able to complete tasks even in regions with complex physical and geographical and adverse climatic conditions, at any time of the day, on equipped and unequipped routes, or even without routes, and on featureless terrain, in conditions of fire and informational resistance by the enemy.

Where this upgraded version differs from its predecessor, the Mi-26 model, is in its new modern NPK90-2V integrated avionics, which significantly simplifies the piloting of the helicopter. The latest avionics system makes it possible to fly a route, come to a preset point, perform approach and final approach manoeuvres, and return to the main or alternate aerodrome in automatic mode. Also, the helicopter is equipped with a digital flight centre, and the crew cockpit has multifunction colour LCD indicators that significantly reduce the workload of the flight crew. Moreover, the Mi-26T2V got a new Vitebsk airborne defence complex that not only detects threats to the helicopter but also combats the attack.

Lighting equipment on the Mi-26T2 is now adapted for the use with night vision goggles, and the cockpit is equipped with new energy-absorbing seats for the crew. There are also improvements to the navigation systems and satellite communications of the helicopter.