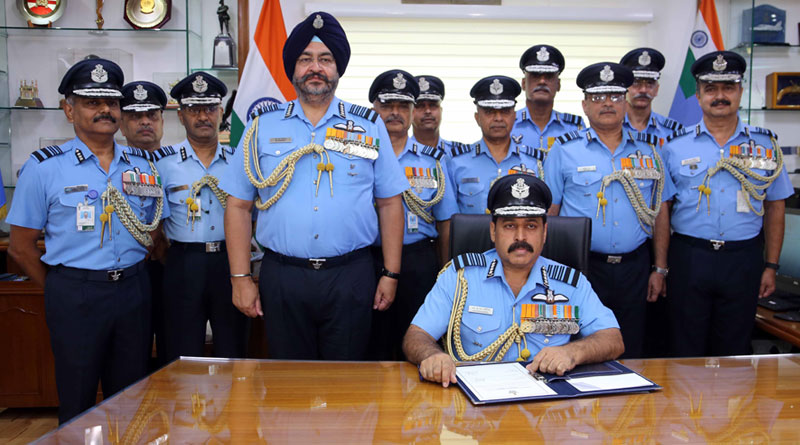 In his address to the IAF, Air Chief Marshal Bhadauria said, “I feel honoured and privileged to have been entrusted with the responsibility of leading one of the finest air forces in the world. I draw immense strength from exceptional achievements and remarkable leadership shown by my illustrious predecessors who built the Indian Air Force. I convey my sincere gratitude to Air Chief Marshal BS Dhanoa for his vision, untiring efforts and extra ordinary leadership in bringing glory to the IAF and the nation.”

He said the focus of the IAF shall be to rapidly operationalise newly inducted platforms and equipment as well as to ensure earliest and complete integration of these capabilities in IAF’s operational plans.  “There shall be impetus on modernisation through acquisition of crucial technologies and critical capabilities with increased reliance on indigenous design and development. We shall proactively promote indigenisation for sustenance of all existing fleets and equipment,” he added. He also laid stress on the importance of training as well the safety of the aircraft and other war fighting equipment.


An alumnus of the prestigious National Defence Academy, he graduated from the Air Force Academy with the coveted ‘Sword of Honour’ and was commissioned in the fighter stream of IAF on 15 June 1980.

Bhadauria has over 4270 hours of experience on twenty-seven types of fighters as well as transport aircraft and holds the unique distinction of being an experimental test pilot, a Cat ‘A’ qualified flying instructor and a pilot attack instructor. He completed his masters in defence studies from Command and Staff College, Bangladesh.

During his illustrious career, spanning almost four decades, the Air Chief Marshal has held a number of significant field and staff appointments which include command of a front line Jaguar Squadron, command of a premier Air Force Station in South-Western sector, served as the Commanding Officer of Flight Test Squadron at Aircraft & System Testing Establishment and Chief Test Pilot as well as Project Director of National Flight Test Centre on Tejas Light Combat Aircraft (LCA) project.

In recognition of his meritorious service, the Air Chief Marshal has been awarded the Vayu Sena Medal (VM) in 2002, Ati Vishist Seva Medal(AVSM) in 2013 and Param Vishist Seva Medal (PVSM) in 2018. He was appointed as the Honorary Air Force ADC to the President of India on 1 January 2019.

He is married to Asha Bhadauria and the couple is blessed with a daughter Sonali and a son Saurav.