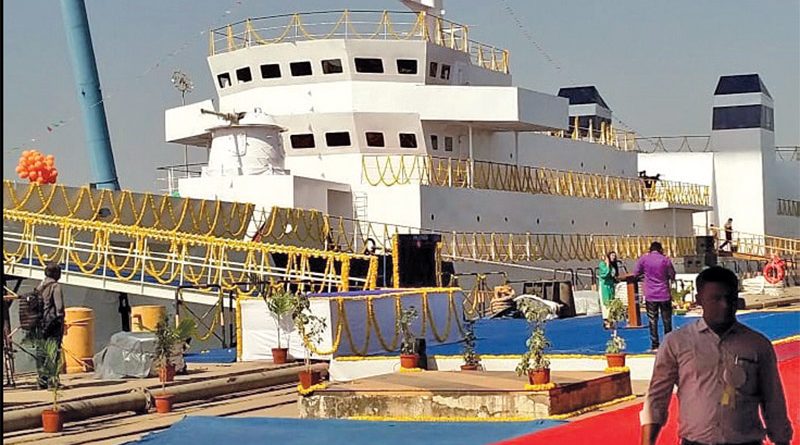 A state-of-the-art Training Ship of 3,000 tonnes displacement was launched on October 24 at the shipyard of Reliance Naval & Engineering, located at the Port of Pipavav, Gujarat.

The training ship, the largest ship ever built for the Indian Coast Guard, was launched at the auspices of Urmila Singh, wife of Director General, Indian Coast Guard, Rajendra Singh. The ship was named by Urmila Singh as ICGS Varuna, at a ceremony attended by a large gathering of Coast Guard officers and sailors, local dignitaries and government officials. As per defence traditions, the slokas of Atharva Vedas were invoked during the launch ceremony.

Reliance Naval has the largest shipbuilding facility in India, encompassing one of the largest dry docks of the world, as well as a latest modular fabrication and engineering facility. The shipyard has an installed throughput of 140,000 tons of steel, equivalent to an annual revenue of a minimum Rs 4,000 crore. The shipyard presently has a meagre order book of Rs 4,000 crore, which does not justify the huge capital investment in building this most modern shipyard.


The shipyard was referred to by the erstwhile Prime Minister, Dr Manmohan Singh, as a ‘National Asset’, because the shipyard is capable of building any size of vessels in the world, including the next 70,000-tonne aircraft carrier for India. India has five PSU shipyards and two large shipyards in the private sector. The total order book of the PSU shipyards is presently Rs 200,000 crore, whereas their combined turnover is just about INR 8,000 crore per annum. In comparison, the two private sector shipyards have an order book of only Rs 6,000 crore. The ship has the primary role to impart sea training to cadets, including an all-round exposure to the lives of Coast Guard officers. The vessel is 105 meters long, with a capacity of accommodating 242 personnel. The vessel is powered by twin diesel engines of 10,400 KW and can move at a speed of 20 knots. The vessel is also equipped with weapons systems and is capable of policing maritime zones of the country as well as for search and rescue missions. The vessel’s capability also includes operating a twin-engine helicopter for undertaking maritime reconnaissance.

The new launch is a synergy of the latest cutting-edge technology and 40 years of operational experience of the Indian Coast Guard, in terms of architecture, ergonomics, training requirements and maintenance envelopes. The vessel is a first-of-its-kind next-generation training ship for trainee officers and has been entirely designed by the design bureau of Reliance Naval & Engineering. Confirmatory model tests for the design were performed at Vienna Test Basin, Austria and vetted by internationally acclaimed experts. The vessel will join the Coast Guard fleet in May 2019 after extensive tests and trials.

Presently, Reliance Naval is constructing 20 ships of three categories for the defence services of the country — these are five naval Offshore Patrol Vessels and 14 Fast Patrol Vessels, apart from the ship launched. Of these, six vessels are expected to be delivered in 2019.