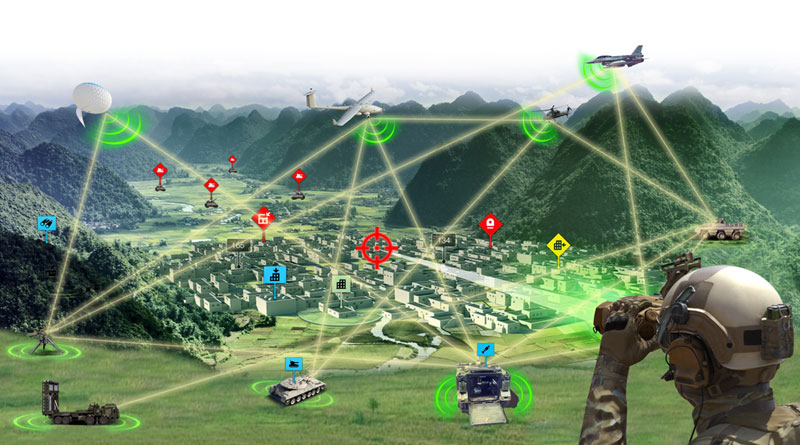 The pairing of MOSKITO TI and FIRE WEAVER allows all tactical commanders and soldiers to see the same, integrated battlefield image. Moreover, any target can be detected, acquired, and neutralized with pinpoint precision and optimal efficiency, including from standoff distances. Together, these capabilities drastically increase the force’s effectiveness and survivability.

MOSKITO TI is a lightweight, multi-purpose target locator that combines higher usability, lower weight, and broader capabilities than any other device in its class. It includes all the essential day/night viewing, measuring and geo-location functions in an efficiently compact, user-friendly package. MOSKITO TI features innovative, versatile view modes, unique connectivity features, and powerful software options. It will enable commanders and soldiers alike to access, receive, and disseminate operational data to other troops and HQ more easily.

This collaboration brings together Safran with state-of-the-art optronics equipment, systems, and sensors, and RAFAEL advanced weapon systems addressing the defensive and offensive requirements of the modern battlefield.

This partnership will provide a significant upgrade to tactical manoeuvring force operation performance, specifically when it comes to situational awareness, identifying and distinguishing friend from foe, location, and target neutralization.

Since 2019, FIRE WEAVER has been assessed by various military forces like the US Army Expeditionary Warrior Experiment (AEWE) program, Israel’s ground forces divisions or by the German Federal Office for Equipment, Information Technology and Use of the Federal Armed Forces (BAAINBw) as part of its ‘Transparent Battlefield’ study in support of its dynamic operations (ErzUntGlas).

Safran Vectronix VP Sales and Marketing, Patrick Drach says, “We strongly believe that the smart digitization of sensors and the optimization of the sensor-to-effector link will make the difference in modern areas of operation. The cooperation between Rafael and Safran is a big step of two world leaders in their domains of activities which go hand in hand to deliver the next level of capabilities to their customers.”

VP and Head of Rafael’s Domain Directorate, Shmulik Olanski, “We are eager to begin this collaboration with Safran Vectronix, a world-class developer of optical systems. This agreement is part of RAFAEL’s core strategy to form global partnerships, and we are confident that bringing together FIRE WEAVER and MOSKITO TI will elevate both these systems to the next level of performance, to provide tactical forces around the world a significant force-multiplier.”