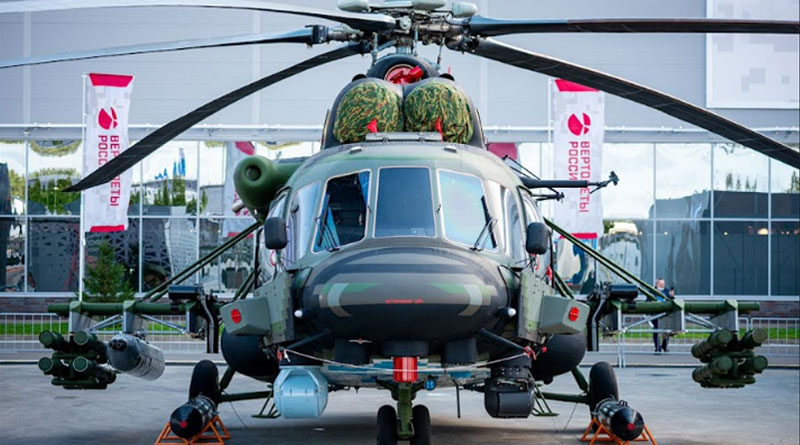 “The multifunctional special forces helicopter has become a breakthrough product in Ulan-Ude Aviation Plant’s line-up. It embodies several solutions that significantly increase its combat effectiveness and survivability,” says managing director of Ulan-Ude Aviation Plant, Alexey Kozlov. Crew members, maintenance personnel and landing group commanders gave their suggestions on how to improve the aircraft. The main task has been to provide security for all participants of the operation.

The Mi-171Sh Storm helicopter is specially designed to carry out counter-terrorism missions by special forces. The helicopter is equipped with high-altitude or increased power engines, a new rotor system with an improved profile composite main rotor and X-shaped tail rotor, an integrated flight and navigation system, and most importantly—an improved composition of weapons and defence systems.

Improving crew and trooper safety was one of the key goals of the upgrade, which is why the Mi-171Sh Storm has improved armour protection on the fuselage. This guarantees mission performance even in fire resistance counteraction. In particular, the onboard defence system provides enhanced survivability and protection. The onboard defence system (ODS) can detect anti-aircraft missile launches and jam portable anti-aircraft missile systems (MANPADS).  The innovation can detect missile launches with infrared and thermal homing heads and knock them off course with jammers and decoys. ODS can also detect enemy radars, determine their irradiate direction, the type of radar, and its operation mode.

The onboard defence system has an innovative feature to instantly display aerosol smoke screens to cover up the loading and unloading of troops. This will protect from, among other things, detection by thermal imaging devices.

Combined titanium and aramid armour helicopter’s protection and other structural measures also increase combat endurance and safety. The troops in the cargo cabin, as well as the most important components and crew protected by armour. For troops protection, the cargo cabin floor is fully covered with removable lightweight Kevlar Armor. The same armour is installed along with the port and starboard side up to the level of the portholes. The Mi-171Sh Storm provides energy-absorbing landing seats for “hard landing”, which improves the survival of troops. With two sliding doors and additional hatches, the Mi-171Sh Storm’s troops landing capabilities have been significantly expanded.

Large-calibre machine guns Kord (calibre 12.7 mm) has been installed to expand aviation weapons range. The aircraft is to be equipped with a modern observation optoelectronic station, including TV and thermal imaging channels, as well as a laser rangefinder. Along with small arms and gun machines, unguided rockets and bombs of various calibres, the helicopter is also equipped with a guided missile system including sighting and targeting system, which allows to fight against air and ground targets, destroy enemy’s fire points and armoured vehicles.