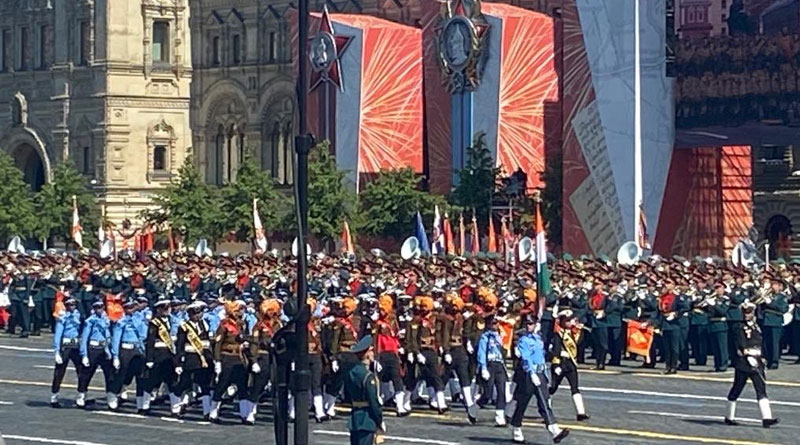 Atleast 14,000 servicemen from 13 countries are marching in the parade

With military vehicles rolling and troops marching, Russia is celebrating the 75th anniversary of the Soviet Union’s victory in the Great Patriotic War (the Eastern Front during WWII where Russia fought against Nazi Germany) on Red Square in Moscow on June 24. The parade was originally scheduled on May 9, 2020 but was postponed due to the COVID-19 pandemic.

Indian delegation led by Defence Minister Rajnath Singh had arrived at Moscow’s Vnukovo-3 airport on June 22 to attend the celebrations.

Atleast 14,000 servicemen from 13 countries are marching in the parade, organised to honour the heroism and sacrifices made by the Russians and other friendly people.

Atleast 10 presidents are visiting the parade, while several diplomats and ministers from various countries have also arrived in Moscow.


Defence Minister of the Russian Federation  Sergey Shoigu had invited Singh to the Victory Parade. A Tri-Service 75-Member Indian Military Contingent is also marching in the Victory Parade along with Russian contingent and other invited contingents. The marching contingent taking part in the Victory Day Parade is being led by a major rank officer of the gallant Sikh Light Infantry Regiment. The Regiment had fought with valour in the World WarII and has proud distinction of earning four BattleHonours and two Military Cross amongst other gallantry awards.

The Indian participation in the Victory Day parade marks tribute to sacrifices made by Russia and other nations in the Second World War in which Indian soldiers also participated.

Meanwhile, Rajnath Singh, who is on a three-day visit to Russia, is said to have been engaging in talks of expediting defence supplies from Russia.

During his visit, the Defence Minister is taking up the issue of urgent supply of equipment and spares needed for the Russian-origin fighter aircraft including the Su-30MKIs and MiG-29s of the Air Force and the MiG29Ks of the Indian Navy, the T-90 battle ranks for the Army and the Kilo-class submarines of the Navy along with other warships.