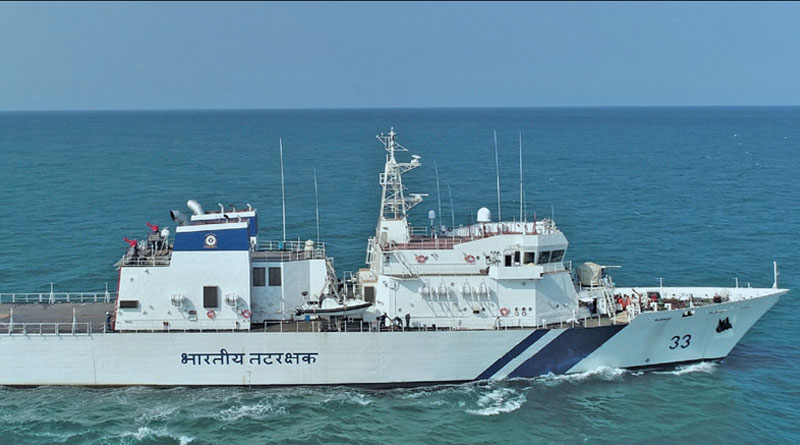 Larsen and Toubro (L&T) built Offshore Patrol Vessel ICGS Vikram was commissioned into the Indian Coast Guard on April 11, in the august presence of MoS defence Subhash Bhamre, at L&T’s defence shipyard at Kattupalli, near Chennai.

The vessel is the ‘First of Class’ of seven new generation Offshore Patrol Vessels (OPVs) contracted by ministry of defence (MoD) to L&T in March 2015, under the government’s initiative of ‘Make in India’.

The defence ship, after its keel was laid in March 2016, was completed within a time-frame of 25 months of build period including trials and commissioning.

Commenting on the commissioning, S.N. Subrahmanyan said, “It is a momentous occasion for L&T to become the first private Indian shipyard to deliver an in-house designed Offshore Patrol Vessel to MoD. L&T Shipyards have achieved unmatched stellar delivery performance in prestigious MoD contracts for 54 Interceptor Boats for Coast Guard, Floating Dock project for Navy and now the OPV for Coast Guard. This bears testimony to our capabilities and commitment towards ‘Make in India’.”

“Given the opportunity and level playing field, L&T can provide the much-needed impetus to the augmentation of Indian Naval and Coast Guard fleets through in-house design and timely delivery of vessels,” added Subrahmanyan.

The OPV project has scored many firsts in India’s nearly six decades of defence shipbuilding history. The entire design and construction of OPVs has been carried out in-house by a private sector shipyard – L&T Shipyard.

“L&T defence shipbuilding capabilities have come of age with over two decades of rich experience in design, engineering and construction of complex defence platforms and three decades of track record in platform specific equipment and systems. On-time commissioning of first of the class OPV ICGS Vikram underlines excellent design and execution capabilities of L&T. In the past one year, 11 new build platforms were launched/ delivered by L&T, all ahead or on schedule. Today, L&T is uniquely placed to address complete value chain of Defence Shipbuilding from design to manufacturing of critical ship equipment, modular construction and through life support,” said Jayant Patil.

Vice Admiral B Kannan elaborated, “Achieving ahead of time delivery for a First of Class called for adoption of modular construction, meticulous planning and deployment of efficiency enabling Digital Technologies. The experienced workforce of L&T along with its vibrant project management skills achieved a high concurrency between design and production, which enabled realization of an unmatched build period of 25 months from keel laying to delivery, which is expected to be further reduced in the subsequent follow on OPVs.”