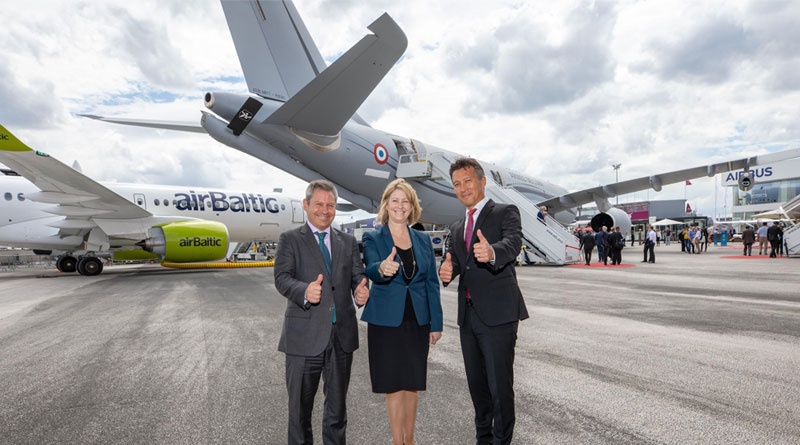 With an agreement in place to explore US military tanking opportunities, Airbus and Lockheed Martin senior executive leaders met for some ‘tanker talk’ during the 2019 Paris Air Show. Head of Military Aircraft, Airbus Defence and Space, Alberto Gutierrez; executive vice president of Lockheed Martin Aeronautics, Michele Evans and CEO of Airbus Defence and Space, Dirk Hoke, had a meeting with the Airbus A330 Multi Role Tanker Transport (A330 MRTT) in the backdrop (as seen in the pic).

“Since signing our Memorandum of Agreement with Airbus last December, our teams have been working to expand our business relationship with a focus on providing the US Air Force with the very best capability in aerial refueling,” said executive vice president for Lockheed Martin Aeronautics, Michele Evans.


“We believe with Airbus’ and Lockheed Martin’s expertise in air refueling and innovative, combat-tested technologies such as low observability and networking operations, we make a powerful team to address the US Air Force’s tanker needs today and into the future,” he added.

CEO of Airbus Defence and Space, Dirk Hoke, said “The relationship with Lockheed Martin through this exciting project is growing day by day, and we’re looking forward to presenting our offer to the US military in the near future. Our A330MRTT has been refueling US military aircraft on combat missions since 2014, and together with Lockheed Martin’s proven record serving the US Air Force we truly believe we can offer unbeatable capabilities.”

Head of Military Aircraft at Airbus, Alberto Gutiérrez, also commented saying, “We have said it before and I can only repeat it – the A330MRTT is the most successful and most capable tanker platform in the world. It has proven its versatility and capability time and again. It is a tremendous asset for any military, including the US.”