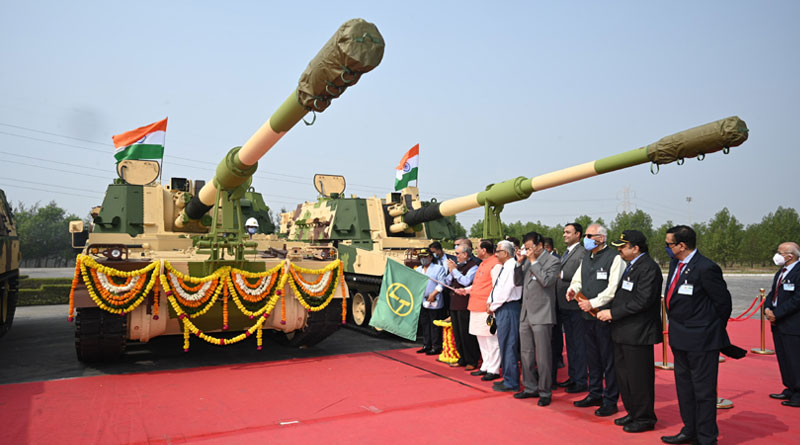 Chief Minister of Gujarat, Vijay Rupani flagged-off the 91st K9 VAJRA-T Gun from L&T’s Armoured System Complex (ASC). Maintaining the track record of ahead-of-time deliveries in this Ministry of Defence (MoD) program, the 91st Gun was also dispatched ahead of contractual delivery date – a testimony to the capabilities and complex system integration skills, planning prowess and execution efficiency of L&T.


On this occasion, Whole-time Director & Senior Executive Vice President (Defence & Smart Technologies),  L&T,  J.D. Patil  said, “The production of Armoured Platforms like the K9 VAJRA contributes to the Indian economy with a large multiplier effect, create new job opportunities and play a significant role in building India’s Defence Industrial Base. With the experience, track record, skills, capabilities and infrastructure that L&T has built at the Armoured Systems Complex in the state of Gujarat, we are ready to develop, qualify and build India’s future armoured platforms for our Armed Forces. The Complex, set up under the Gujarat State’s Aerospace & Defence policy to produce Armoured Systems, is a flagship Defence Production Unit under the progressive policies of the State.”

“With the delivery of 91st Vajra Howitzer, we have created an Industry benchmark by once again delivering the only in-service, 155mm/52 calibre Artillery Gun, ahead of schedule. We hope and believe that under the Atmanirbhar Bharat policies of the Central Government, the Complex will remain fully engaged in providing sustenance to the painstakingly built supply chain for building Armoured Platforms indigenously and the State of Gujarat will continue to encourage and support the high technology Defence and Aerospace Production units in service of the Nation,” he added.

The ‘K9 VAJRA-T’ systems are being delivered with more than 80% indigenous work packages and above 50% indigenisation (by value) at the Program level. This involves local production of over 13,000 types of components per gun system through a supply chain of about 1000 industrial partners, mostly MSMEs, with about 150 of them being from the state of Gujarat.

It further added, “The VAJRA variant developed by L&T with India specific features emerged Fully Compliant to Indian Army’s needs during the arduous and extended Field Trials. L&T exceeded the indigenous manufacturing content by grooming a young team of engineers and specialising them in manufacturing automation and integration with the help of its in-house team of weapon system experts as well as by training at Hanwha facilities in South Korea. Subsequently, this team trained the supply chain partners as well as teams from L&T’s five Defence production units from the State of Gujarat, Maharashtra, Karnataka, and Tamil Nadu, that served as hubs for the nearly 1000 supply chain partners in a Hub and Spoke supply chain model.”