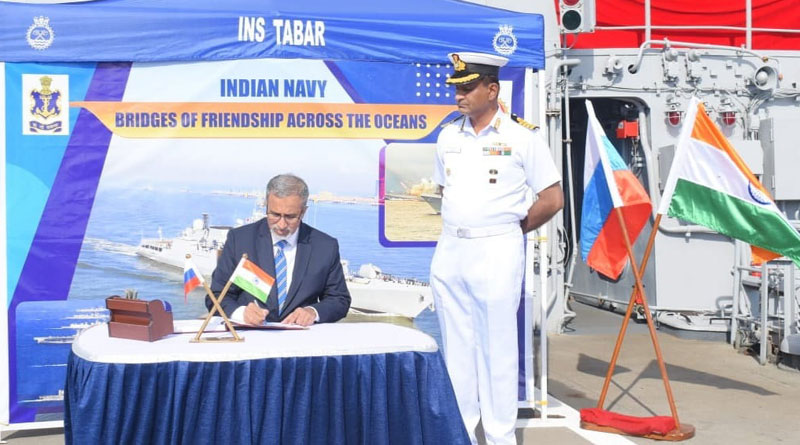 INS Tabar reached St Petersburg, Russia on 22 July to participate in the 325th Navy Day celebrations of the Russian Navy. On 23 July, Ambassador of India to the Russian Federation, D B Venkatesh Varma visited the ship and was briefed by the Commanding Officer regarding the present deployment. The Ambassador appreciated the role played by the Indian Navy in guarding India’s sea frontiers and in further strengthening the friendly India-Russia relations.

Deputy Commander of Russian Navy’s Baltic Fleet, Vice Admiral Sergei Yeliseyev visited Tabar on 23 July. He was received onboard with a guard of honour. He expressed deep appreciation to the Indian Navy for participation of the ship in the important event for the Russian Federation Navy (RuFN). He said that the two navies have strong bilateral relations and wished for more frequent mutual interactions. The Commanding Officer presented the Admiral with the ship’s crest on conclusion of the visit.

On 25 July, the 325th Navy Day of the Russian Navy, the ship joined the column of ships in naval parade reviewed by Mr Vladimir Putin, the President of Russian Federation. Over 50 ships, motorboats, submarines, 48 airplanes and helicopters of the naval aviation took part in the parade.

Post Navy Day celebrations, Tabar will participate in Exercise INDRA scheduled to be held on 28 and 29 July in the Baltic Sea with two Russian Navy ships.