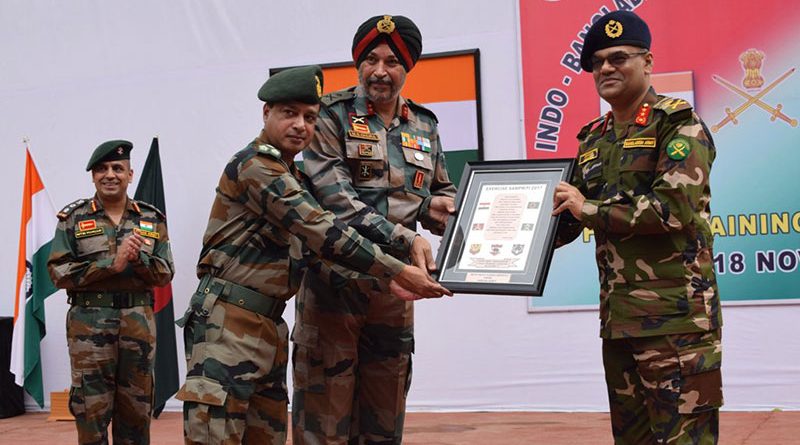 The closing ceremony for the seventh Indo-Bangladesh joint exercise SAMPRITI was held at Counter Insurgency and Jungle Warfare School, Vairengte in Mizoram on November 17. Exercise SAMPRITI is an important bilateral defence cooperation endeavour between India and Bangladesh. Maj. Gen. Md Moshfequr Rahman of Bangladesh Army and Maj. Gen. M S Ghura of the Indian Army presided over the ceremony.

The exercise was aimed at strengthening and broadening the aspects of interoperability and cooperation between the Indian and Bangladesh Armies while working together in a counter-insurgency and counter-terrorism environment under the UN mandate. Exercise was conducted under the aegis of the Red Horns Division of Gajraj Corps and had two distinct components which included Command Post Exercise (CPX) and Field Training Exercise (FTX).


Troops from 38 East Bengal Regiment of Bangladesh Army and Mahar Regiment of Indian Army represented respective armies during the exercise. The CPX was conducted at recently created Joint Training Node, Umroi, Meghalaya from November 6-11, for over six days whereas FTX was conducted at Counter Insurgency and Jungle Warfare School, Vairengte, Mizoram from November 6, for over a period of 13 days. The CPX focused on planning of counter-terrorist operations whereas during FTX focus was on company/ platoon level tactical drills. A tactical exercise was also conducted during the FTX.

Both contingents displayed great enthusiasm and professionalism while carrying out joint drills and skill displays during the conduct of exercise and it was a great learning experience for both the contingents. The troops have not only learnt about each other’s organisation, but have also identified best practices. The exercise was a great success and has taught valuable lessons to the troops of both the countries. Joint exercises between armies across the world are increasingly becoming an important aspect of the bilateral relations. Exercise SAMPRITI between the armies of India & Bangladesh was not only symbolic of their maturing relationship but will also built trust and confidence between both armies.