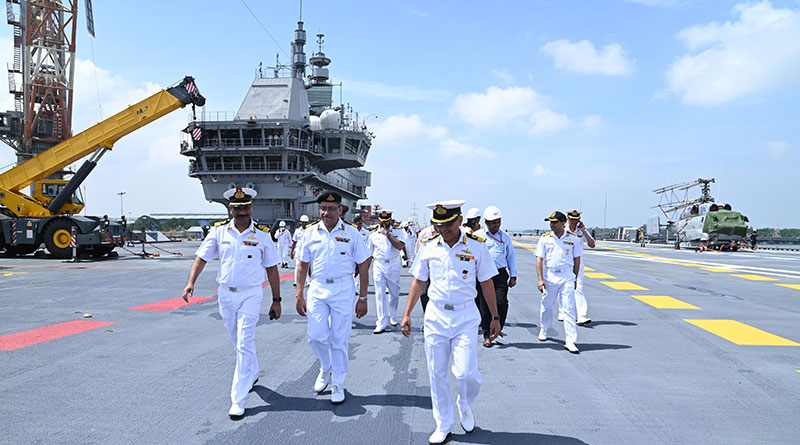 Indian Navy took the delivery of Indigenous Aircraft Carrier-I (IAC-I) Vikrant from her builder Cochin Shipyard Limited (CSL), Kochi. Designed by the Indian Navy’s inhouse Directorate of Naval Design (DND) and built by CSL, the carrier is christened after her predecessor, India’s first aircraft carrier which played a vital role in the 1971 war. A press statement from the Indian Navy stated, “Coinciding with the celebrations to commemorate the 75th anniversary of India’s independence ‘Azadi Ka Amrit Mahotsav’, the reincarnation of Vikrant is a true testimony to the country’s zeal and fervor in pursuing capability build up towards enhanced maritime security.”

The 262-metre-long carrier has a full displacement of close to 45,000 tonnes which is much larger and advanced than her predecessor. The ship is powered by four gas turbines totaling 88 MW power and has a maximum speed of 28 knots. Built at an overall cost of close to Rs. 20,000 crores, the project has been progressed in three phases of contract between the MoD and CSL, concluded in May 2007, Dec 2014, and Oct 2019 respectively. The ship’s keel was laid in Feb 2009, followed by launching in Aug 2013. With an overall indigenous content of 76 percent.

Vikrant has been built with high degree of automation for machinery operation, ship navigation and survivability, and has been designed to accommodate an assortment of fixed wing and rotary aircraft. The ship would be capable of operating air wing consisting of 30 aircraft comprising of MIG-29K fighter jets, Kamov-31, MH-60R multi-role helicopters, in addition to indigenously manufactured Advanced Light Helicopters (ALH) and Light Combat Aircraft (LCA) (Navy). Using a novel aircraft-operation mode known as STOBAR (Short Take- Off but Arrested Landing), the IAC is equipped with a ski- jump for launching aircraft, and a set of ‘arrester wires’ for their recovery onboard.

The ship has large number of indigenous equipment and machinery, involving major industrial houses in the country viz. BEL, BHEL, GRSE, Keltron, Kirloskar, Larsen & Toubro, Wartsila India etc. as well as over 100 MSMEs. The indigenisation efforts have also led to development of ancillary industries, besides generation of employment opportunities and bolstering plough back effect on economy, both locally as well as pan-India. A major spin-off of this is the development and production of indigenous warship grade steel for the ship through a partnership between Navy, DRDO and Steel Authority of India (SAIL), which has enabled the country to become self-sufficient with respect to warship steel. Today all the warships being built in the country are being manufactured using indigenous steel.

Several design iterations, including use of 3D Virtual Reality models and advanced engineering software were used by the Directorate of Naval Design in shaping the design of the carrier. CSL had also upgraded their shipbuilding infrastructure as well as enhanced productivity skills during the building of the ship.

Vikrant has been delivered to the Indian Navy by CSL following extensive user acceptance trials conducted between Aug 2021 and Jul 2022, during which the ship’s performance, including hull, main propulsion, PGD, auxiliary equipment, aviation facilities, weapon & sensors as well as sea keeping & manoeuvring capabilities were proved satisfactory in accordance with trial protocols and system parameters. The delivery of Vikrant is the culmination of a long design, build and trials phase, during which both Indian Navy and CSL had to overcome multitude of unprecedented technical and logistic challenges including COVID-19 pandemic and changed geo-political scenario. The successful delivery of the indigenous carrier, a major milestone activity and historical event, is testimony to the dedicated efforts of large number of stakeholders within Indian Navy, shipyard, industry, OEMs & MSMEs for over two decades.

The Indigenous Aircraft Carrier would soon be commissioned into the Indian Navy as Indian Naval Ship (INS) Vikrant which would bolster India’s position in the Indian Ocean Region (IOR) and its quest for a blue water Navy. 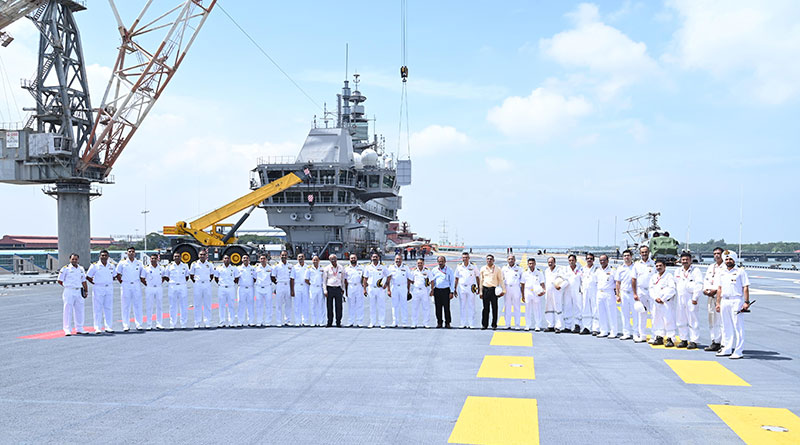