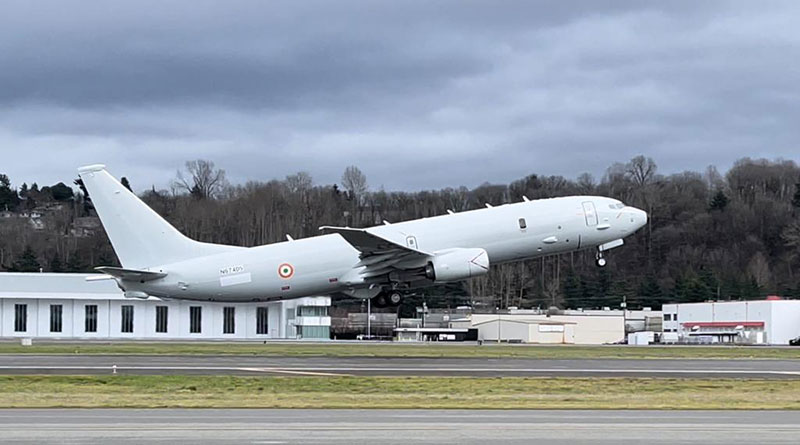 Boeing delivered the 12th P-8I maritime patrol aircraft to India on February 23. This is the fourth of four additional aircraft delivered under the options contract signed by the Ministry of Defence in 2016.

“Customer centricity, commitment to the modernization and mission-readiness of India’s defence forces are key values to our partnership with India,” said managing director, Boeing Defence India, Surendra Ahuja. “With this delivery of the P-8I maritime patrol aircraft, we continue to nurture this partnership and are fully committed to working closely with India’s defence forces to deliver the right value and capabilities to meet their operational needs,” Ahuja added.

The P-8I is an integral part of the Indian Navy’s fleet and has surpassed 35,000 flight hours since it was inducted in 2013. The aircraft, with its exceptional maritime surveillance and reconnaissance capabilities, versatility and operational readiness, has proven to be an important asset to the Navy. In addition to unmatched maritime reconnaissance and anti-submarine warfare capabilities, the P-8I has been deployed to assist during disaster relief and humanitarian missions.

The Indian Navy was the first international customer for the P-8 and today, the P-8 is also operated by the U.S. Navy, the Royal Australian Air Force, the United Kingdom’s Royal Air Force and the Royal Norwegian Air Force.

Several complex and mission critical P-8I components such as the radar fingerprinting system, IFF (I/T) and datalink, speech secrecy system, mobile satcom system and wire harnesses are made in India by supplier partners, including Micro, Small & Medium Enterprises (MSMEs) located across the nation. Boeing plans to enhance in-country technical services support for the P-8I fleet by leveraging the skills and expertise of Boeing’s India Engineering and Technology Center.

Boeing is also completing construction on the Training Support & Data Handling Centre at INS Rajali, Arakkonam, in Tamil Nadu, and a secondary center at the Naval Institute of Aeronautical Technology, Kochi, as part of a training-and-support package contract signed in 2019. The indigenous, ground-based training will allow the IN crew to increase mission proficiency in a shorter time, while reducing the on-aircraft training time resulting in increased aircraft availability for mission tasking.