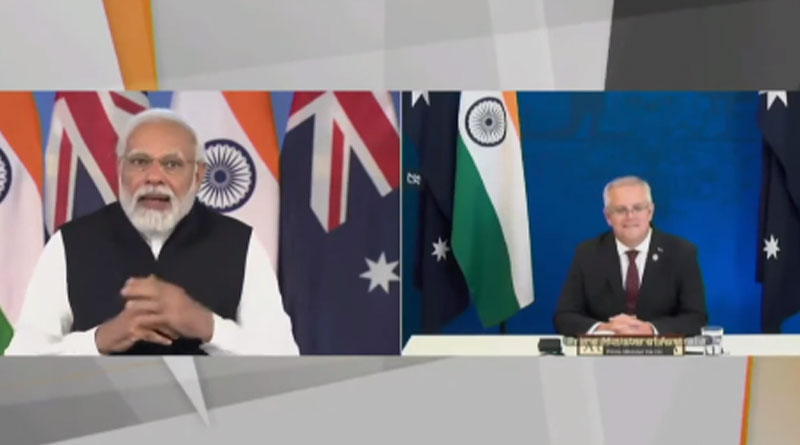 Prime Minister Narendra Modi interacted with his Australian counterpart, Scott Morrison virtually. The two leaders lauded the cooperation between the two countries and the Quad.

“Significant progress in diverse sectors witnessed in our ties in last few years. Our collaboration reflects commitment to free, open and inclusive Indo-Pacific PM Modi in virtual summit with Australian PM Scott Morrison,” PM Modi said. He added that in the last virtual summit, the two countries had given their relationship the form of a comprehensive strategic partnership. “I’m happy that today we’re establishing the mechanism of annual summit between the two nations. This will prepare a structural system for regular review of our relations. In the past few years, our relations have seen remarkable growth. Trade and investment, defence and security, education and innovation, science and technology – in all these sectors we’ve very close cooperation.”

Australian PM said, “Our region is facing increasing change and much pressure, and I think our Quad leaders call recently gave us the opportunity to discuss Russia’s unlawful invasion of Ukraine.”

Ahead of the summit, Australia returned 29 antiquities to India. Modi thanked Morrison for the gesture. “I thank you for initiative to return the Indian antiquities. Antiquities sent by you include hundreds of years old artifacts & photos that were illegally taken out of Rajasthan, WB, Gujarat, Himachal Pradesh & other states. On behalf of all Indians, I thank you.”

In his opening remarks, Morrison noted that the summit was being held against the “very distressing backdrop of the war in Europe” and said Russia must be held to account for the tragic loss of life in Ukraine. Modi did not refer to the situation in Ukraine or Russia in his opening remarks.

Cooperation between like-minded liberal democracies is key to an open, inclusive, resilient and prosperous Indo-Pacific, and India and Australia have made good progress in defence, maritime cooperation, science and technology, clean energy, and critical minerals.

Australia is expected to announce investments of more than ₹1,500 crore and a slew of initiatives to enhance cooperation in areas ranging from rare earth minerals to defence.

Ahead of the summit, Australian High Commissioner to India Barry O’Farrell said, “The Quad countries have accepted India’s position. We understand that each country has bilateral relationship, and it is clear from the comments of the Ministry of External Affairs and Prime Minister Modi himself that he has used his contacts to call for the end of the conflict and no country will be unhappy with that.”