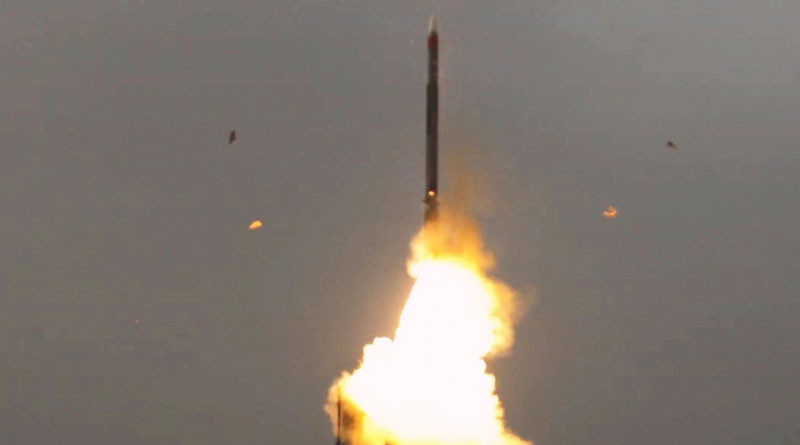 After the completion of successful series of trials of the BARAK Air and Missile Defense System, Israel Aerospace Industries (IAI) on 19 April unveiled documentation of the challenging trials, which tested the system’s capabilities in a range of scenarios and threats, including the interception of an assaulting ballistic target by the BARAK ER (Extended Range) interceptor.

The BARAK ER Air Defense System, developed by IAI, combines the capability to intercept airborne threats at an extended range of 150 kilometers and ballistic targets. The ER interceptor is part of IAI’s BARAK Air Defense System’s family, capable of various ranges. The extended range capability is made possible in part by adjusting the interceptor and MMR radar capabilities to a 150 km range, and can be fitted for both naval and land platforms.

The BARAK ER interceptor tested in the trial series was taken directly from the company’s production line. The BARAK ER revolutionizes air defense with unprecedented flexibility, both in real-time full net-centric combat management as well as with unique smart launchers. The launchers are capable of independently launching and managing any mix of interceptors without a dedicated command post on site. The sophisticated battle management system optimizes the interceptors to match threats in real time. Thanks to these features, an operator can create unique responses to a mix of interceptors across different threats, as well as phase their procurement gradually according to budget constraints.

IAI President and CEO, Boaz Levy said, “The BARAK Air Defense System is a modern yet mature, operationally proven system that maximizes the capabilities required to meet threats today, in particular, against ballistic targets. The system has both naval and land versions. Both versions share building blocks, relying on the air defense know-how developed at IAI over the past decades. IAI produces all of the system’s elements in-house, including: radars, launchers, missiles, and the command and control center. Only select companies in the world possess such comprehensive capabilities. The extensive firing trials to which the system was subjected under difficult land and sea conditions is the best proof of the system’s capabilities. The modular approach, and the smart launchers, fit customer demand for utmost flexibility on the battlefield and in procurement given budget constraints. As such, BARAK provides an optimal solution for the present and future battlefield.”

As per a press statement, “IAI’s BARAK is one of the world’s most advanced defense systems. Operationally proven, it is used by several armies worldwide, including the Israeli Navy, India’s air-force, army and navy, and additional customers. BARAK provides wide-area protection against a range of air, sea and ground threats, including ballistic, ground-to-ground, and cruise missiles, UAVs, and helicopters.”

BARAK consists of several systems representing the forefront of technology, including: interceptors for a variety of ranges and advanced homing seekers, digital MMR radar or MFSTAR radar for naval platforms, command and control system, and unified launchers for different ranges. These systems are complemented by breakthrough communication and connectivity capabilities, providing the user with optimal force activation using several batteries or ships for the multidimensional battlefield.