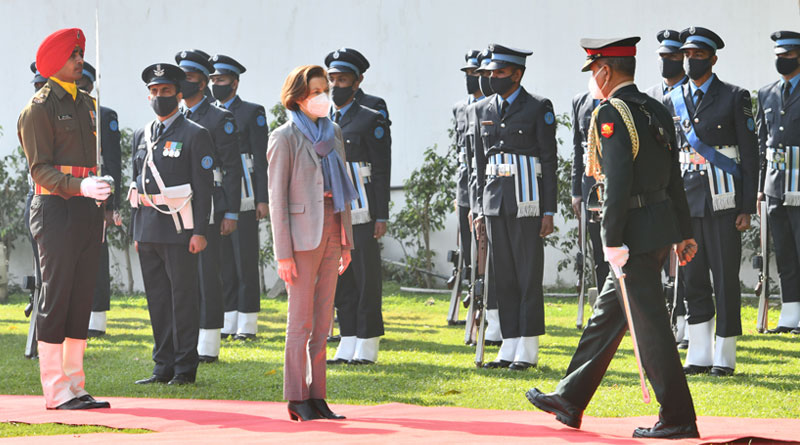 Minister for the Armed Forces of France, Florence Parly visited India on 17 December. She discussed a number of issues ranging from maritime security in the Indo-Pacific to industrial and technological partnership in line with the ‘Make in India’ programme, and cooperation on counter terrorism with her Indian counterpart Rajnath Singh.

Speaking about the Indian Air Force being satisfied with Rafale jets, Parly said, “I am very happy that the Indian Air Force is satisfied with its Rafales and we are very proud that despite Covid-19, the 36 aircraft were delivered on time according to the contract. It’s a real achievement. She also said that France stood ready to meet any requirement for more Rafale combat jets from India even as it worked to bolster the Make in India initiative by integrating Indian manufacturers into the global supply chain. She described the Rafales to be the ‘real asset and strength’ for bilateral cooperation. “I am sure that there is room for new developments,” she said.

Regarding China’s high-handedness, earlier at a virtual conversation organised by Ananta Centre on India-France cooperation to defend a rules-based Indo-Pacific, Parly said that China’s behaviour in the region was becoming ‘more and more aggressive’, and that France seeks to find a ‘delicate balance’ between addressing such behaviour and cooperating with China on issues such as climate change and trade.

During the third India-France Annual Defence Dialogue with Rajnath Singh, Parly said both India and France promote multilateralism and a rules-based international order, noting that it is good to refer to ‘rock-solid principles’ when the world and the region experienced upheavals. Parly also spoke about the convergence of views by the two sides in dealing with major issues and global challenges including the fight against climate change.

Regarding the newly formed AUKUS grouping between the US, UK and Australia which saw Australia cancel its 90bn USD submarine deal with France, Parly said called it a ‘disappointing development for France.’