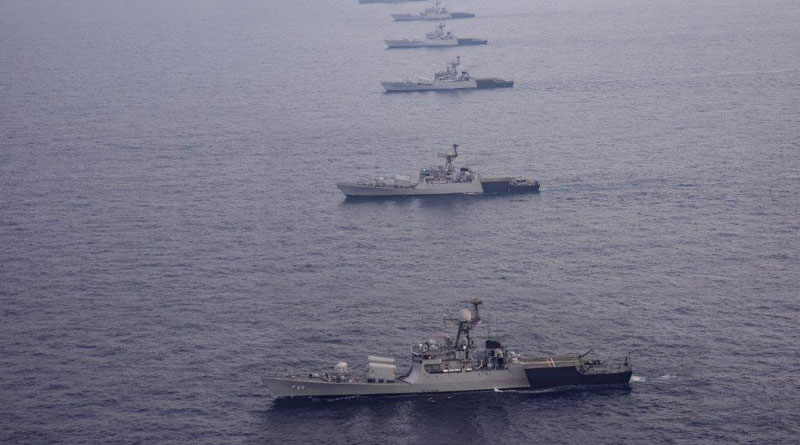 Vice Admiral Atul Kumar Jain PVSM, AVSM, VSM Flag Officer Commanding-in-Chief (FOC-in-C) Eastern Naval Command (ENC) reviewed the operational preparedness and combat-readiness of Eastern Fleet at sea over four days. Twenty-two ships of the Eastern Fleet participated in the Operational Readiness Inspection. During the review, force protection against asymmetric attacks, weapon firings, anti-submarine drills including torpedo firings and fleet manoeuvres were demonstrated under realistic conditions. FOCINC East embarked on various Fleet ships to witness their readiness first hand and also interacted with the men onboard. The fleet was put through paces to showcase the multi-dimensional warfare capabilities in protecting the vast maritime borders and offshore assets of the country.


A press statement from the Navy stated, “Despite the challenges posed by COVID-19, the Eastern Fleet has maintained a very high ops tempo to meet all National tasking in and beyond the Indian Ocean Region, including events in wake of the Galwan crisis. Exercises and evolutions covering the entire spectrum of Naval Operations were undertaken at sea and the Fleet continued to hone its skills for various Naval Operations.” The ships have also been regularly deployed across the Indian Navy’s Area of Responsibility (AOR) for Mission-Based Deployments and Humanitarian Assistance and Disaster Relief (HADR) missions. Towards progressing diplomatic role of the Indian Navy, ships of the Eastern Fleet have engaged in bilateral/ multilateral exercises with a large number of friendly navies.