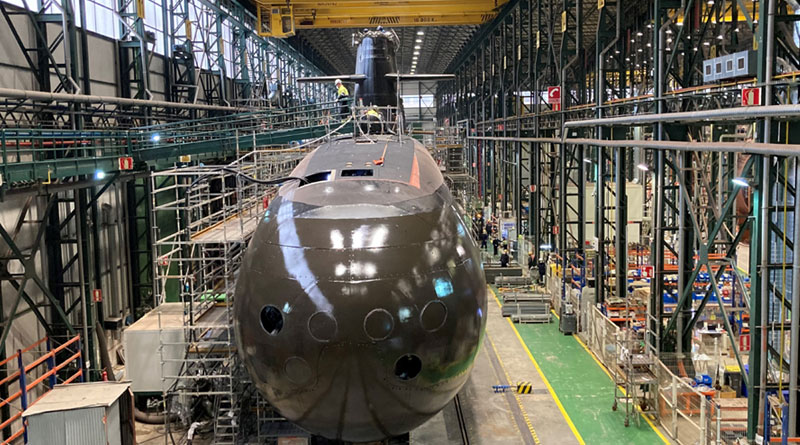 His Majesty King Felipe VI, accompanied by Her Majesty the Queen, Her Royal Highness the Princess of Asturias and Her Royal Highness Infanta Sofia will preside over the launching ceremony of S-81, the first submarine of S-80 class, in Navantia shipyard in Cartagena (Murcia, Spain).

The S-81, which will be named ‘Isaac Peral’, is the first submarine designed and built in Spain. This represents a strong commitment with national technological development, and thus, with national defence as well as with the international positioning of Spanish industrial sector.

With S-80 program, Spain becomes one of the few countries that can design and build submarines, an extremely complex task because these vessels must operate autonomously in a hostile environment. Therefore, they require highly specialized skills in different areas of knowledge and a highly qualified industrial and technological industry.

The submarines will have an overall length of 80.8 metres, a diameter of 7.3 metres, and a submerged displacement of around 3,000 tonnes. They include the integrated combat system and platform control system developed by Navantia Sistemas the integrated platform control system developed by Navantia Sistemas. They will have BEST-AIP, an atmosphere-independent propulsion system, which supplies the ship with electrical power at any depth so that it can remain underwater for longer periods.

Therefore, S-80 has improved considerably its stealth capabilities, the main attribute of a submarine. The S-80 stands as the world’s most advanced conventional submarines and has drawn the attention of several navies and opened opportunities in a highly technological international market.

The ceremony, which will be held under health and safety precautions due to the current health situation, will be held ahead of the process of setting it afloat. This process, which takes long hours, will be carried out by shipyard staff as a routine of work in the following days.

The next phases will be harbour tests and sea tests, which include sailing up to the maximum operating depth. The first sailing is scheduled for early 2022 and delivery to the Navy in early 2023.

The S-80 programme has meant a technological leap for Navantia and its cooperating industries, placing them at the forefront of the world’s conventional submarines market. Around one hundred companies from 11 different Spanish regions are taking part in the programme.