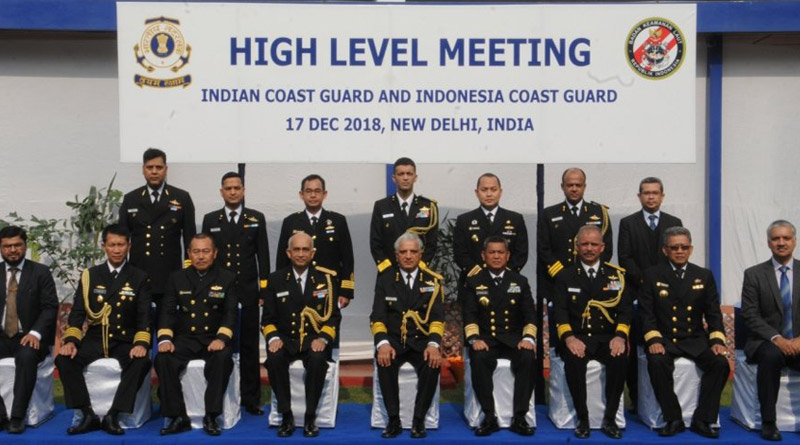 A seven-member delegation of the Indonesian Coast Guard (BAKAMLA) led by Chief of BAKAMLA, Vice Admiral A. Taufiqoerrochman is being hosted by Director General, Indian Coast Guard G. Rajendra Singh from December 16 to December 19. Back in August this year, both countries had agreed that the Chief of BAKAMLA would visit India for a high-level meeting during the 6th India-Indonesia Joint Defence Cooperation Committee (JDCC) meeting.


The first high-level meeting between the Indian Coast Guard and BAKAMLA was held at the ICG HQ in New Delhi on December 17. During the meeting, both sides agreed to pursue an early signing of the Memorandum of Understanding (MoU) which is in the final stages of approval. Timeline for the conduct of reciprocal ship visits and tabletop exercise in the domain of Maritime Search & Rescue was also agreed upon.  Cooperation between the two agencies in the multilateral forum of Asian Coast Guards, ‘HACGAM’, was also acknowledged. This high-level meeting and visit are in continuation of the efforts by the governments of the two countries to enhance cooperation between the Coast Guards in the field of maritime safety and security at sea. ICG and BAKAMLA relations have a robust history with ICG ships visiting Indonesia for professional interactions since 2003.

Both countries have agreed to a Comprehensive Strategic Partnership with a strong emphasis from both sides to boost bilateral defence cooperation including maritime security and cooperation.