A multi-role submarine, SOV400 is primarily meant for deployment and recovery of special forces while being submerged up to 40m. Its uniquely designed lock-in/lock-out system enables quick release and recovery of marine commandos, while submerged. Two 4-men Swimmer Delivery Vehicles carried on either side of the submarine can insert the divers deep inside enemy coastlines. In lieu of the SDVs, the submarine can carry ammunition and special equipment in two commando containers.

The submarine is fitted with twin torpedo tubes that can launch heavyweight torpedoes for attacks in shallow waters or in self-defence. It is also fitted with a modern conformal array sonar and advanced radio-electronic sensors for detection, surveillance, communication and interception which provide tactical information for the command through an integrated combat management system.

The SOV400 is designed to operate safely in coastal waters as shallow as 20m. Its cruciform-type aft control surfaces have been specially designed to meet this requirement. The submarine can hover at any depth and can be bottomed if necessary.

The submarine is designed to operate with a lean crew of 12 through an integrated platform management system. All machinery and equipment located in the aft compartment can be remotely operated from the central control console located in the forward compartment 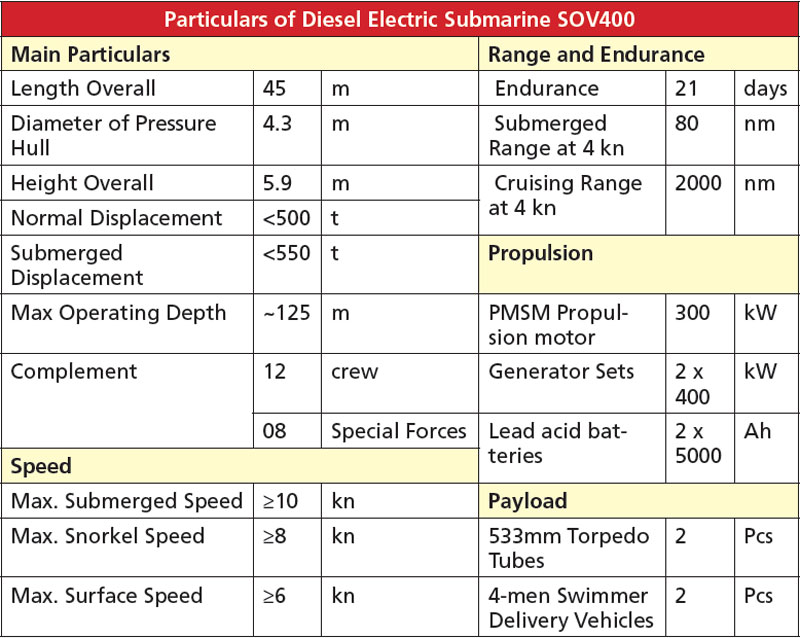 Hull structures (made of indigenously developed submarine grade DMR 249 steel), equipment and piping of SOV400 are designed to comply with the safety standards as per DNV GL rules for classification of naval submarines. All critical-for-safety systems have been designed to be fail-safe, ensuring uninterrupted functioning even after failure of a single component. Smoke detection and fire alarm systems, gas monitoring systems, nitrogen-based fire-fighting systems, SEIE Mk-11 suits and means for emergency escape and rescue (either through the main access trunk or through the aft escape hatch) offer adequate degree of safety and survivability of the platform and its crew.

Two AC plants of 140 kW combined cooling capacity maintain the living and operational spaces at 26 degree C even while cruising on the surface in extreme tropical seas. Quality of breathable air is maintained by the built-in oxygen regeneration system and soda lime carbon dioxide scrubbers. Fixed bunk beds have been provided for the commandos and crew, except for those on watch.

Since the SOV400 is a fully home-grown product, the design can be customised to suit specific requirements of the user. L&T is already working on an advanced variant with futuristic technologies including Li-lon batteries.