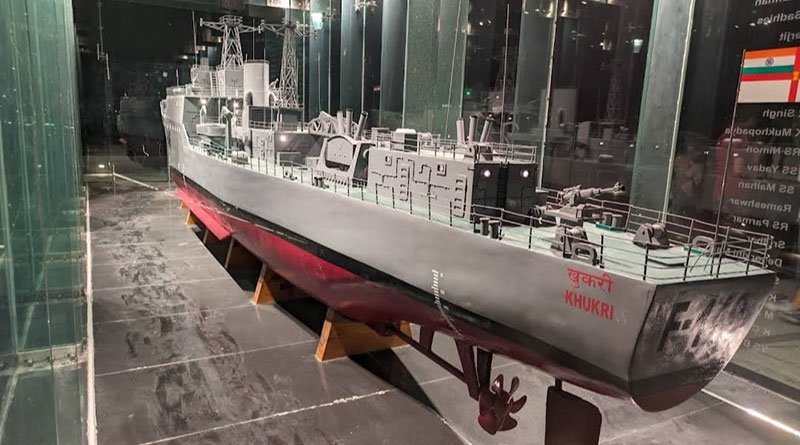 INS Khukri, lead ship of the Indian Navy’s Khukri class corvettes and an indigenous surface-to-surface missile fitted vessel that had the distinction of being part of both, the Western and Eastern Fleets, is scheduled to be handed over to the Diu Administration on 26 January 2022.

Built by Mazagon Dock Shipbuilders, the ship was commissioned on 23 August 1989 in Mumbai by Krishna Chandra Pant, the then Defence Minister and Sudha Mulla, wife of late Capt. Mahendra Nath Mulla, MVC.

After more than 32 glorious years of service to the nation and having participated in all forms of naval operations, the ship was decommissioned in a solemn ceremony on 23 December 2021 when the national flag, naval ensign and decommissioning pennant were lowered at sunset in the presence of Flag Officer Commanding-in-Chief, Eastern Naval Command, Vice Admiral Biswajit Dasgupta.

A ship never dies, it is said. She is re-born in a new avatar. In fact, the decommissioned vessel is the second ship of the Navy to carry the name INS Khukri, the first having been lost during the 1971 Indo-Pak War off the coast of Diu. The valiant crew of that ship, led by late Captain Mahendra Nath Mulla (MVC), has been immortalized in the Khukri Memorial at Diu where a scaled-down model of their old ship is displayed in solemn splendour.

As part of developing and revitalising the Khukri Memorial, the Diu Administration had approached the Ministry of Defence in 2019 for gifting to it, for public display, a decommissioned naval vessel. As it turned out, it was time for the second Khukri to be paid off. This is the vessel that will be handed over officially to the Diu Administration. The ship commenced her last journey under tow by Indian Navy ships from Visakhapatnam and arrived at Diu on 14 January 2022.

As the nation celebrates its 73rd Republic Day, she will be handed over to Diu Administration in a ceremonial event to be held at the Khukri Memorial. The ship is planned to be developed as a full-scale museum. In this role too, she will inspire the people of the nation, true to her motto and war cry: ‘Bal, Sahas, Josh Aur Dum, Khukri Nahi Kissi Se Kam’.