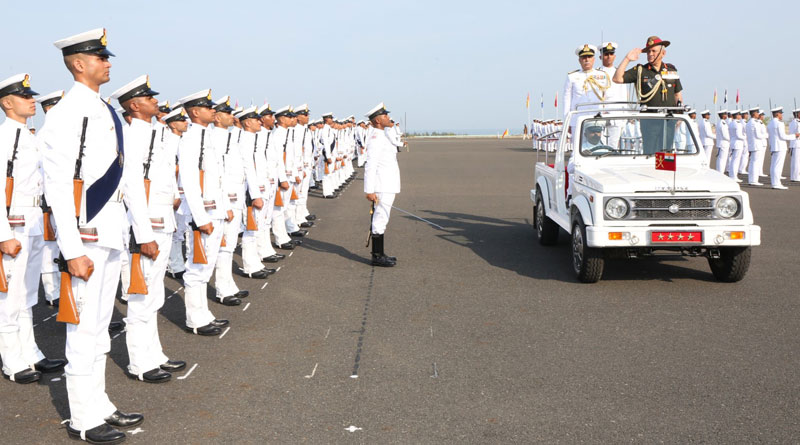 The parade was reviewed by Chief of the Army Staff General Bipin Rawat, who awarded medals to eight meritorious midshipmen and cadets after the ceremonial review

The Passing out Parade (POP) at Indian Naval Academy (INA), Ezhimala, on 25 May 2019, saw 264 trainees comprising midshipmen and cadets of Indian Navy, Indian Coast Guard, and ten international cadets passing out, marking the culmination of their ab-initio training.

The ten trainees from various friendly foreign countries included two trainees each from Maldives, Myanmar and Seychelles, one trainee from Tanzania and three trainees from Sri Lanka. The passing out batch of Sri Lanka trainees have the distinction to be the first batch of foreign trainees to complete the four years BTech curriculum from INA, ever since its institution.

The glittering ceremony culminated with the successful trainees forming up in two columns and marching with their gleaming swords and rifles held in salute, past the Academy’s Saluting Dias, the Quarterdeck, in Slow March, to the traditional notes of ‘Auld Lang Syne’, the poignant farewell tune played by armed forces around the world when bidding adieu to colleagues and comrades. Passing out courses were bid farewell by a batch of three MiG 29-K fighter aircraft in Vic formation led by Cdr Viaksh Narwal, NM from Indian Naval Air Squadron 303 who carried out a low fly past over the quarterdeck welcoming the new officers to the Navy and joined the celebrations with a bomb burst manoeuvre.

After the parade, parents and guardians of the cadets shipped the Naval and Coast Guard epaulettes, known as ‘Stripes’, on the shoulders of their wards, thus symbolising their transformation from ‘cadets’ into full-fledged Navy and Coast Guard Officers. 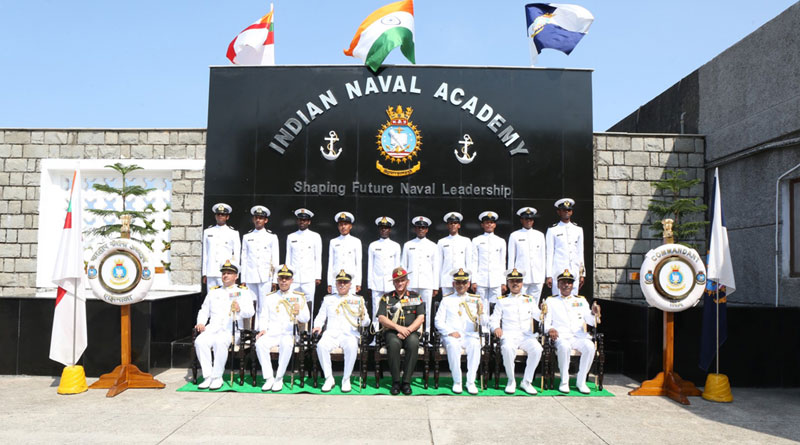