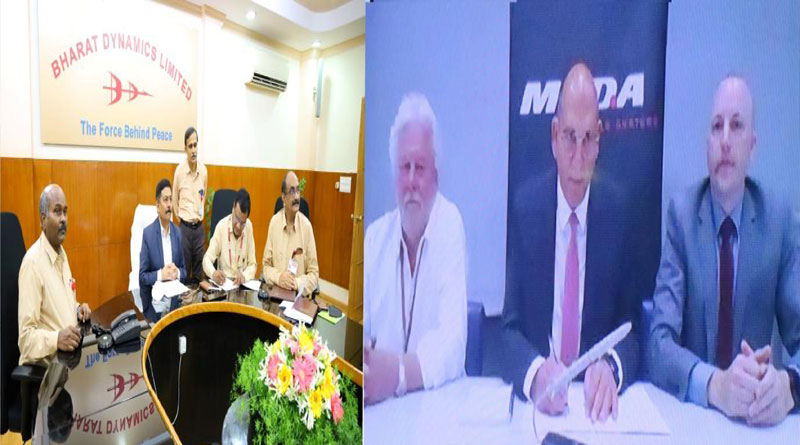 BDL and MBDA signed a licensing agreement to establish the manufacturing facility in India. The agreement was signed by Director (Technical), from BDL and George Kyriakides, International Industrial Cooperation Director from MBDA, N. P. Diwakar in the presence of CMD, BDL, Commodore Siddharth Mishra (Retd) at a virtual ceremony. Director (Production), BDL, P. Radhakrishna, Director (Finance), BDL, N Srinivasulu and senior officials of both the companies were also present on the occasion.

Under the licensing agreement, MBDA will transfer the equipment and knowledge to BDL for establishing the facility. Work on establishing this capability in India is due to start immediately and is expected to commence operations by the year 2022-23.

Commodore Siddharth Mishra (Retd), CMD, BDL stated that signing of the licensing agreement reinforces the Company’s commitment to contribute towards ‘Make in India’ and the ‘Atmanirbhar’ initiatives of Government of India in the Defence sector. ASRAAM is one of the Within Visual Range missiles available and BDL will be manufacturing these at its Bhanur Unit for the domestic and export in future through MBDA.

The new facility aims at providing India with the ability to carry out final assembly, integration and test of ASRAAM missiles. BDL has been endeavouring to enter into a tie-up with foreign OEMs (Original Equipment Manufacturers) in pursuit of its expansion programme. The agreement signed with MBDA today is one such effort, which will go a long way in further strengthening the collaboration, which BDL has with MBDA for its various missile programmes.

International Industrial Cooperation Director of MBDA, George Kyriakides,said, “We are very pleased to be establishing this new ASRAAM facility in India with BDL. MBDA has a long and highly successful history of working with BDL for over four decades, a partnership that has seen BDL manufacture large number of MBDA-designed Milan missiles in India.”

The agreement to establish the facility follows on from an earlier Memorandum of Understanding (MoU) between BDL and MBDA on ASRAAM FAIT signed during 2019.

This new BDL ASRAAM facility will have the potential to also conduct maintenance, repair and overhaul (MRO) of ASRAAM missiles. The facility can also be adapted to conduct final assembly, integration and test of the CAMM missile of MBDA. CAMM is the missile used by the Sea Ceptor naval air defence system that has been offered as Short-Range Surface to Air Missile (SRSAM) requirement.

ASRAAM, a Within Visual Range Air Dominance weapon, is New Generation Close Combat Missile. Its low drag, aerodynamic airframe, unrivalled speed and manoeuvrability throughout its flight, increased agility make the best missile in its category of weapons. The missile has full ‘Lock on Before Launch’ and ‘Lock on After Launch’ operating modes.

BDL is the only Company in India involved in manufacturing various types of missiles and underwater weapons for supply to the Indian Armed Forces and friendly foreign counties. The Company also handles launchers, test equipment, refurbishment / life extension of missiles and counter measures systems for domestic as well as international market.