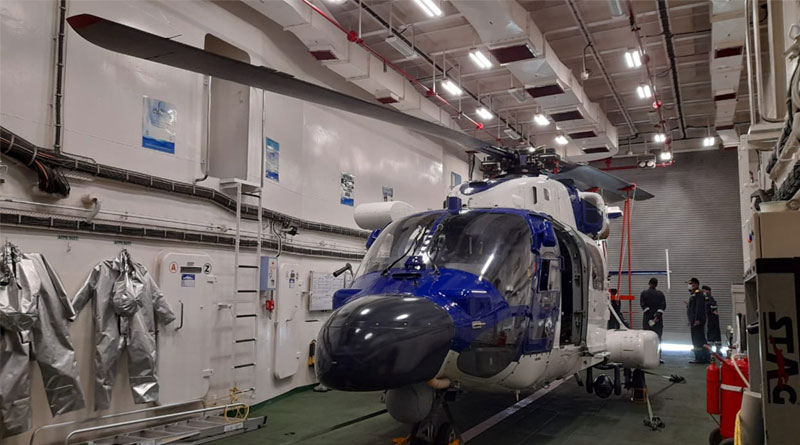 HAL’s Advanced Light Helicopter Dhruv Mk III MR has successfully demonstrated its deck-operations capabilities that include landing on deck, folding of blades and storing the helicopter inside the onboard hangar. The recently concluded ship-borne trials off Chennai coast in collaboration with the Indian Coast Guard also covered maintenance activities inside the hangar and on the deck, hot refueling with engines running on the deck. The helicopter is equipped with the most modern and reliable Shakti engines and an advanced glass cockpit. HAL had recently delivered ALH Dhruv Mk III MR to Indian Coast Guard as part of its 16 ALH Contract.

“These trials have proven the capability of ALH Dhruv to carry out extended operations from ships. Some of the missions that were successfully executed were surveillance, search and rescue, antipollution to address oil spillage, etc. With the successful demonstration of these capabilities like blade folding, stowage, the helicopter is now ready to be fielded for operations,” said CMD, HAL, R. Madhavan.

Dhruv Mk III MR is equipped with the most modern surveillance radar that can detect and identify ships and boats up to a range of 120 nautical miles to enable the Indian Coast Guard in its duty to secure the nation from threats. Coupled with an electro-optical sensor that can closely monitor even the smallest of the vessels at distances as far as 30 nautical miles, ALH Dhruv will boost the capabilities of the Indian Coast Guard.