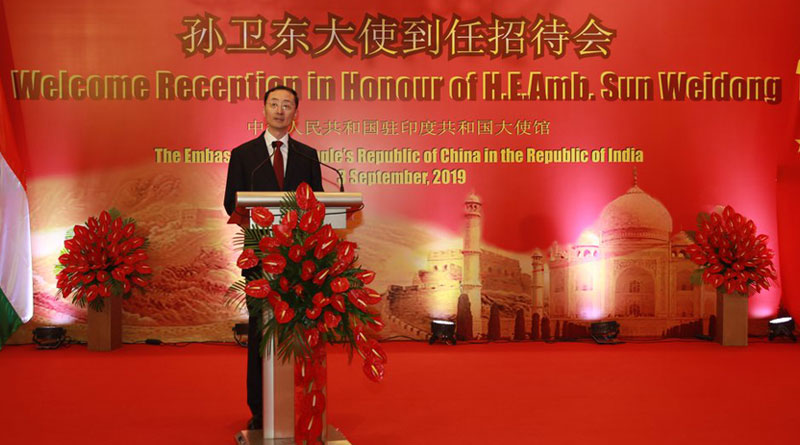 This is my second time to work in India, and I am happy to meet so many friends, both old and new. I feel like returning an old friend’s home, I find many changes, new subways in all directions, bustling shopping malls, and busy streets with brand new cars. I would like to express sincere congratulations to all my Indian friends for India’s remarkable achievements. But I also remember that the Indian civilization lasts for thousands of years, a dozen years is just a short span. India has not only made amazing progress, but also preserved its rich historical heritage, diversity, inclusiveness as well as vitality.

The world is also undergoing major changes unseen in a century. The rise of emerging economies represented by China and India has changed the international landscape and increased the representation and voice of developing countries in international affairs. At the same time, against the backdrop of instability and uncertainty in the world, peace and development continue to be the theme of our times, and aspiration for a better life is always the pursuit of people all over the world.

Recently, I watched an Indian movie called Hindi Medium. It is about a young Indian couple, who tried desperately to get a better education for their daughter. Such feelings of parents are not only seen in India, but also in Chinese families. As the only two large developing countries with over one billion population, China and India have so many similarities than any other country in the world. We had splendid ancient civilisations, suffered from colonial and imperial aggression, achieved national liberation and independence almost at the same time, and jointly advocated the Five Principles of Peaceful Coexistence. At present, both of us face the common task of growing the economy and improving people’s livelihoods. China is striving for its ‘two centenary goals’, and India is working towards the goal of building a ‘new India’. China and India should learn from and help each other to realise win-win cooperation and common development.


President Xi Jinping pointed out that the development of China and India is the trend of the times and an important opportunity to each other. As I see it, China and India are neighbours, partners and friends. Amicable exchanges have always been the mainstream of bilateral relations. President Xi Jinping and Prime Minister Narendra Modi initiated the ‘hometown diplomacy’ and later held a historic informal summit in Wuhan, China. The Closer Developmental Partnership between China and India is moving forward along the track of sound and steady development. Today over 1,000 Chinese companies are doing business in India, with a cumulative investment of 8 billion US dollars, which has created 200,000 local jobs. More than two-thirds of Indian companies investing in China are making handsome profits, 40 per cent of them would like to increase their investment in China this year. China-India High-Level People-to-People and Cultural Exchanges Mechanism has promoted people-to-people cooperation a new highlight. The box office of Indian films is twice as much in China as in India. The Indian pavilion at the Beijing International Horticultural Expo has attracted millions of Chinese visitors. With the long history, large population and economic volume of the two countries, China-India cooperation enjoys vast potential for development.

If China and India speak in one voice, the whole world will listen. We both advocate world multi-polarity, economic globalisation, trade liberalisation, and oppose unilateralism and protectionism. We can closely coordinate under the framework of BRICS, G20 and SCO, to jointly tackle global challenges and to promote a fair and just global governance order. China and India both uphold the concepts of ‘Great Harmony’ and ‘The World as One Family’. The ancient oriental wisdom is still showing vitality today. I believe China and India have all the vision and ability to find the path of joint development and win-win cooperation between major emerging countries. This will contribute to the development of a community with a shared future for mankind. In this sense, China-India relations have extended beyond bilateral dimensions, and are significant in maintaining regional and global peace, prosperity and development.

Peace is the precondition for development, and also the eternal aspiration of mankind. Without peace, it is difficult to achieve economic growth, improvement of people’s livelihoods, and social stability. To maintain regional and global peace and stability is not only the common responsibility of China and India, but also the need of the two countries to materialize their own development. For neighbours and major countries, differences are hard to avoid. The key is to properly handle them. We should put issues in the bigger picture, reduce differences through consultation, settle disputes through dialogue, promote peace through development, and enhance mutual trust through cooperation. Only by this way can we lead the trend of our times and meet people’s expectations.

The Chinese government attaches great importance to its relations with India, which is a basic foreign policy we have adhered to for a long time. Personally I think in the future, the two sides could promote the development of China-India relations from four dimensions, namely, ‘leading, transmitting, shaping and integrating’. ‘Leading’ means to make the second informal summit a success by highlighting the guidance of the two leaders. ‘Transmitting’ refers to the transmission of the leaders’ consensus to all levels and translate the consensus into tangible cooperation and outcomes. ‘Shaping’ means going beyond the mode of managing differences, shaping bilateral relations and accumulating positive momentum. ‘Integrating’ means to strengthen exchanges and cooperation, promote convergence of interests and achieve common development.

This year marks the 70th anniversary of the founding of the People’s Republic of China. Over the past 7 decades, China has successfully embarked on a path of socialism with Chinese characteristics, and made great strides from standing up and growing wealthy to becoming stronger. China’s economy is moving towards high-quality development, growing by 6.3 per cent year-on-year in the first half of this year. The economic structure continued to improve, and the third industry contributed 60.3 per cent of the growth. In 2018, the retail sales of consumer goods in China totalled 5.76 trillion US dollars, making it the second largest consumer market in the world. China is opening wider to the outside world. It recently announced the establishment of six new pilot free trade zones, bringing the total number to 18. All countries in the world will benefit from China’s greater opening-up.

What China has achieved is not a godsend. It comes from our people’s hard work by overcoming all obstacles and difficulties. We resolutely oppose provoking trade frictions, openly interfering in China’s internal affairs and undermining our interests, and we will firmly defend our legitimate interests. We are willing to properly handle differences on the basis of mutual respect and resolve issues through dialogue and negotiation. Any consultation and negotiation must be based on equality and mutual respect. The result should be mutually beneficial.

Some Indian friends may follow the situation in China’s Hong Kong. Recently, some radical protesters have committed violent crimes under the pretext of anti-extradition bill, gravely trampling on the rule of law and social order in Hong Kong, and challenging the bottom line of the ‘one country, two systems’ principle. Some external forces meddled in China’s internal affairs, deliberately calling violent crimes as peaceful protest. This is an outright ‘double standard’. Violence is not tolerated in any civilised society. The top priority for Hong Kong is to stop violence and chaos. Hong Kong affairs are purely China’s internal affairs. This is a fact recognised internationally. There is no sovereign issue over Hong Kong at all. We would never allow any external forces to interfere in Hong Kong affairs. Be it in the past, present or future, China has all the ability, confidence and resilience to overcome any risk and challenge.

Next year marks the 70th anniversary of China-India diplomatic ties. I am ready to work with friends from all walks of life in India to implement the consensus reached by the two leaders, focus on cooperation, seek common development and promote China-India relations to a new height.

(The writer is China’s ambassador to India. The talk was given at a recent reception in Delhi)