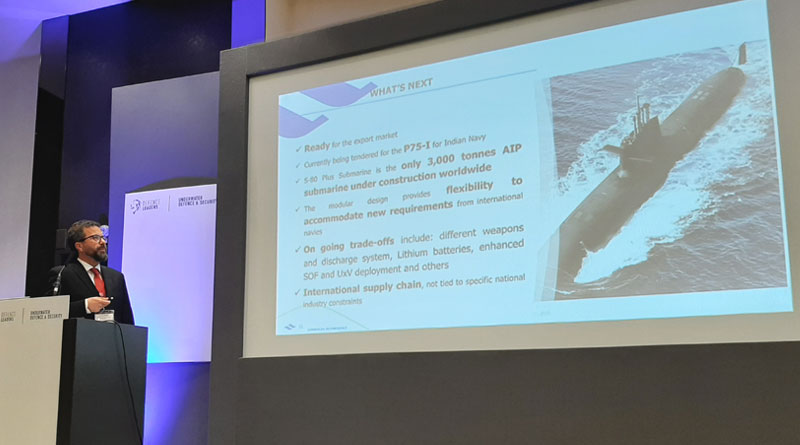 Navantia, currently, is offering a design derived from this submarine to the Indian Navy, for the P75(I) program, for design and construction of six units.

Spanish state-owned shipbuilding company Navantia has participated in the three-day “Underwater Defence and Security 2020” Conference and reported on progress of the S80 Plus submarine programme. The S-80 Plus submarine is a last generation highly technological product, “whose versatility allows the export”, read the company statement.

Navantia, currently, is offering a design derived from this submarine to the Indian Navy, for the P75(I) program, for design and construction of six units.

The first submarine in the series has passed the hull closure milestone and is scheduled to be floated at the end of this year 2020, tested during 2021, and delivered to the Spanish Navy in 2022.

The Cartagena shipyard Engineering Director, Germán Romero Valiente, made a presentation of the characteristics and capacities of the Spanish S80 Plus submarine, which the company statement describes as “a unique product in the international market for its size and capacity, thanks to its AIP system.”


The AIP (Air Independent Propulsion) system has been developed specifically for the project by the Spanish company Abengoa (bioethanol reformer) and the American Collins Aerospace (fuel cells). “The AIP system is much more versatile and efficient than others on the market.”

Among other advantages, it uses an agricultural bio-ethanol, available internationally, fuel cell membranes require half the maintenance of the market standard, and its efficiency allows it to operate for periods of up to 3 weeks underwater.

This edition of UDS, organised by Defence leaders, that took place in Southampton, in London from 3-5 March 2020, has had a record participation with attendees and lecturers from 36 countries.

Navantia was also invited to a panel of experts where future trends in rescue and underwater rescue were discussed.