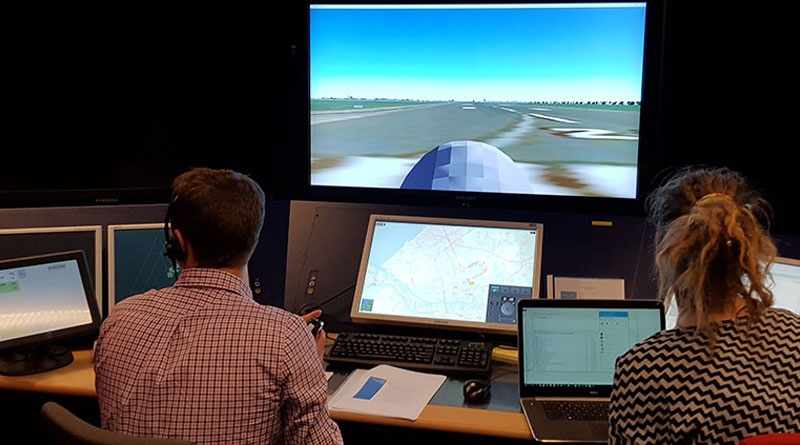 On 28-29 May 2019, the Netherlands Research Laboratory (NLR) worked with and authorised General Atomics Aeronautical Systems, Inc. (GA‑ASI) to conduct a simulated flight demonstration where civil Air Traffic Controllers (ATCOs) in an ATC Tower and Terminal Approach Facility managed the flight of a Medium-altitude, Long-endurance (MALE) Remotely Piloted Aircraft (RPA) in a busy civilian airport like a manned aircraft. The flight featured a simulated MQ-9B SkyGuardian RPA, which is designed and developed by GA‑ASI.

“This simulated MALE RPA flight operating under Instrument Flight Rules (IFR) was actively managed by civil ATCOs, dealing with every conceivable contingency scenario,” said the president, GA-ASI, David R. Alexander. “This demonstration helps show the Air Traffic Management community that flying large RPA in civil airspace can be as safe as managing a commercial manned aircraft, when the RPAS is properly designed.”


GA-ASI supported the 3-D modelling of the SkyGuardian so that NLR, through NARSIM, could enable civil ATCOs to control the RPA as if it was any manned aircraft, taking off and landing at a civil airport. NLR facilitated the demonstration in their facility and set up seven contingency and emergency scenarios for the RPAS pilot to fly, including Loss of Propulsion; Loss of Datalink (C2 Link); Loss of Voice Communications; Missed Approach; Missed Departure; Airborne Traffic Conflict; and Failure of the Automatic Landing System. The simulated flights were based out of the Rotterdam Airport (EHRD) with representative civil air traffic.

The Royal Air Force (RAF) is acquiring SkyGuardian as part of its Protector RG Mk1 programme and is scheduled for first delivery in the early 2020s. The government of Belgium has approved Belgian Defence to negotiate the acquisition of SkyGuardian to meet the nation’s RPA requirements. The aircraft is also being considered by the Australian Defence Force, who chose GA-ASI to supply an RPA system for Project Air 7003.