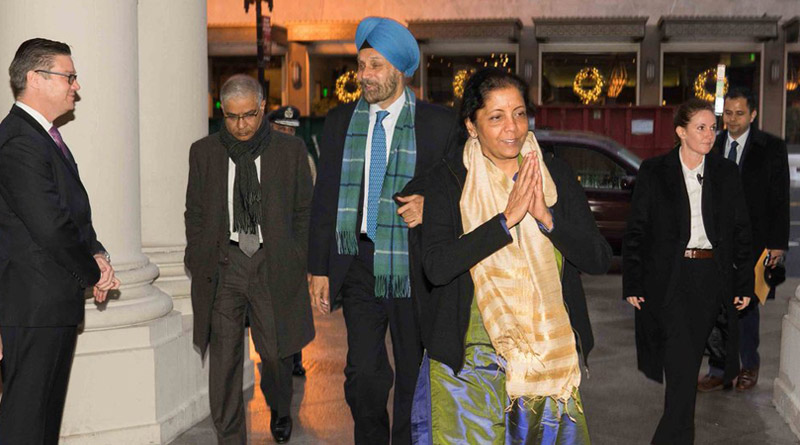 The defence minister to chart the course of tri-service exercise between India, Japan and US

Indian defence minister, Nirmala Sitharaman, has embarked on her highly crucial tour to the United States to discuss and fast track the defence deals and reaffirm the bilateral strategic partnership in Indo-Pacific region.

Sitharaman left India on December 1, and among other important engagements, she will be visiting the US Indo-Pacific Command in Hawaii to review military-to-military relations and discuss the conduct of the first ever India-US tri-service military exercise slated to take place off Bay of Bengal in May-June 2019.

Following up on the tri-lateral meeting between Prime Minister Narendra Modi, President Donald Trump and Japanese Premier Shinzo Abe, Sitharaman will be meeting her US counterpart James Mattis on December 3. The engagement would include a clarity on the waiver for sanctions under Countering America’s Adversaries Through Sanctions Act (CAATSA), the development is noteworthy in light of India’s recent deal with Russia on the procurement of USD 5.43 billion for S-400 long-range air-defence systems.


The five-day visit will include a review of the expanding defence cooperation between the United States and India, and the procurement deals signed this year between the two countries. The defence minister is likely going to discuss the procurements of Predator B drones and the National Advanced Surface to Air Missile System II (NASAMS II) with her American counterpart during the visit.

The Rs 13,500 crore deal for acquiring 24 MH-60Rs in a government to government deal to be executed under the Foreign Military Sales (FMS) route is expected to be inked during her visit. The MH-60Rs will be a crucial procurement for the Indian Navy since the current inventory of Anti-Submarine Warfare capable helicopters is virtually negligible with only a handful of helicopters functional.