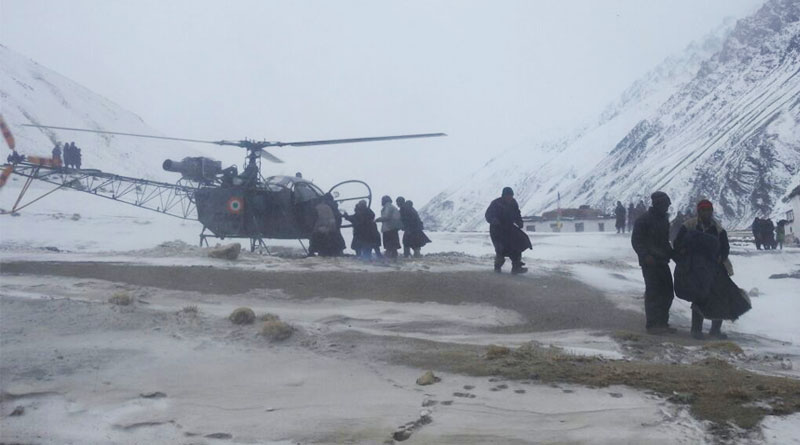 The 35 year old, Stanzin Laton, suffering from dysphagia, was three months pregnant and stuck in an inaccessible valley, short of Shinkun La pass.

The ‘Siachen Pioneers’ based at Air Force Station Leh undertook a casualty evacuation of a three month pregnant, 35 year old, Stanzin Laton, suffering from dysphagia from a remote village known as Kurgiak which is located in an inaccessible valley, short of Shinkun La pass beyond Padam, on February 16.

It was already two pm in the afternoon and the weather was overcast with all passes covered. Within a very short period of time, the crew assessed the weather, discussed the contingencies and planned the route with maximum fuel to avoid requirement of refueling. The formation got airborne within thirty minutes, with Wing Commander SI Khan and Flight lieutenant Pravin in the lead aircraft and Wing Commander SK Pradhan and Squadron Leader A Bedekar as No 2.

The weather en route was marginal and the narrow and turbulent valley, devoid of any force landing fields made the task challenging. However, the crew negotiated the valley and reached Padam. And after a quick turnaround servicing, the formation got airborne again for Kurgiak which was another fifty kilometres ahead of Padam. The weather inside the Kurgiak valley was deteriorating with cloud base lowering further. The terrain was completely snow-bound and the fading light due to clouds increased the chances of disorientation. However, the crew located the village successfully. Since the terrain was snow bound and no clear field was available, the crew chose a site close to the village which was sloping but manageable, and picked up the casualty.

Due to high altitude, lack of oxygen coupled with extremely low temperatures, the lady was having difficulty in breathing with the aircraft buffeting in turbulent winds and light fading further. The crew successfully negotiated the adverse weather and recovered back at Leh in time, to save the life of the pregnant lady.